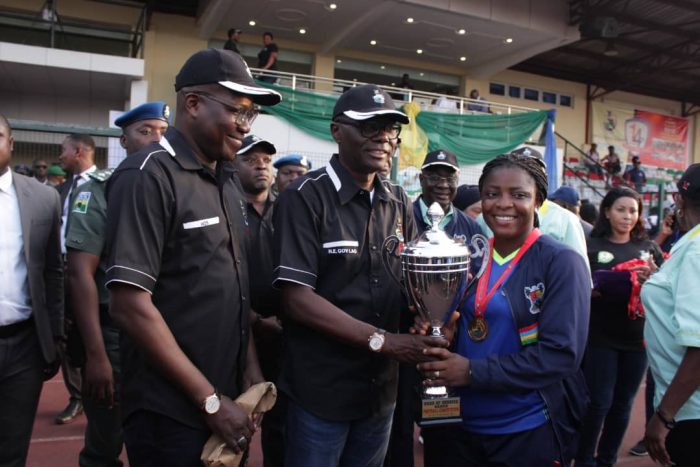 Governor Babajide Sanwo-Olu presenting trophy to the PSO female football team for winning the football competition, With them is the HoS, Hakeem Muri-Okunola at the Agege Stadium on Tuesday.

Winners have emerged at the grand finale of the 2019 Lagos Head of Service (HoS) Games held at the Agege Stadium, Lagos, Southwest Nigeria on Tuesday.

In the female football competition, the Public Service Office, PSO, mauled Lagos Sports Commission 3-0 to win the trophy and gold medal, while in the male category, the Lagos State Traffic Management Authority, LASTMA thrashed Surveyor General’s Office 4-1 to claim the trophy and the gold medal.

For the male Category in Ayo, Yusuf Saidi from SUBEB came first, followed by Ayodele Ademola also from SUBEB while Momoh Lateef from Works and Infrastructure came third. In the female category, Aiyegbusi Olukemi of Lagos State ports Commission emerged winner, while Oladokun Taiwo from SUBEB was runner-up and Aderemi Bukola from Home Affairs emerging third.

Speaking at the event, Lagos State Governor, Babajide Sanwo-Olu said he was impressed with the level of the HoS Games and assured that the welfare of civil servants would be of utmost importance to his administration.

HOS, Hakeem Muri-Okunola, while speaking said the origin of the event dated back to 2006 when the former HOS, Yakub Balogun introduced the annual inter-agency HOS Football competition with the objective of fostering the spirit of sportsmanship and camaraderie, as well as promoting physical exercise among public servants in the state.

He said on his assumption of office, the tournament was expanded and taken to a new level with the introduction of six additional sports, thus transiting from HoS Cup to HoS Games, adding that the newly introduced sports were Ayo, Chess, Scrabble, Tennis, Table Tennis and Tug of War.

Muri-Okunola said the games were manifestation of the present administration’s effort to encourage the psycho-motor development of a healthy and alert workforce towards the provision of effective and efficient service delivery to Lagosians.

“The games, apart from encouraging emerging and hidden talents in the Lagos State Public Service to the fore, promotes a fitness regimen which is beneficial to the mental and physical wellbeing of participants and spectators alike.

“In addition, football talents discovered in past editions have gone on to represent the state in bigger football and other sporting tournaments. It is pertinent to emphasise that sporting talents abound in the Lagos State Public Service. In fact, some of the participants in the HoS Games are not only nationally ranked, but featured prominently in World Rankings in Chess and Scrabble.

“The HoS Games, in the last couple of years, has now been transformed with new innovations and activities to add glamour and class to the fiesta. The games now has its proprietary brand logo and medals. In addition, all participating players were presented for mandatory medical examination and were issued medical certificates of fitness in order to ensure that all the players are in good physical condition,” he stated.