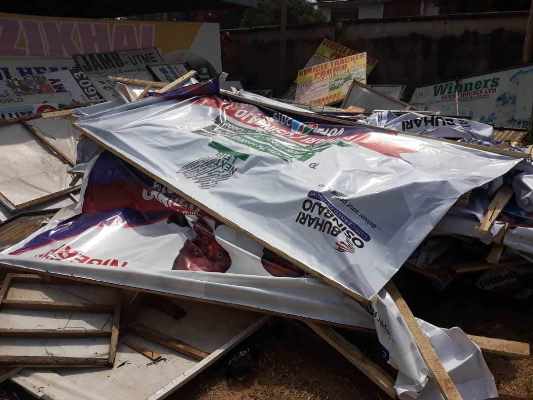 A 57-year-old businessman, Abubakar Abioro, who allegedly damaged a billboard valued at N500,000, on Thursday was arraigned in an Ikeja Chief Magistrates’ Court.

According to the News Agency of Nigeria (NAN), the police charged Abioro, who resides at No. 2, Ashogbon St., Ikeja, with two counts of unlawful damage and causing breach of peace.

The Prosecutor, ASP Ezekiel Ayorinde, told the court that the defendant committed the offence on Aug. 31, at Allen Avenue Roundabout, Ikeja.

Ayorinde alleged that the defendant told the police that the land where the billboard was erected belonged to him.

The prosecutor said the billboard valued at N500,000, was property of Plural Media and Technology Limited.

The offence, he said, contravened the provisions of sections 168 and 350 of the Criminal Laws of Lagos State, 2015.

Chief Magistrate B.O. Osunsanmi admitted the defendant to bail in the sum of N200,000 with two sureties in like sum.

Osunsanmi adjourned the case until Dec. 11, for mention.