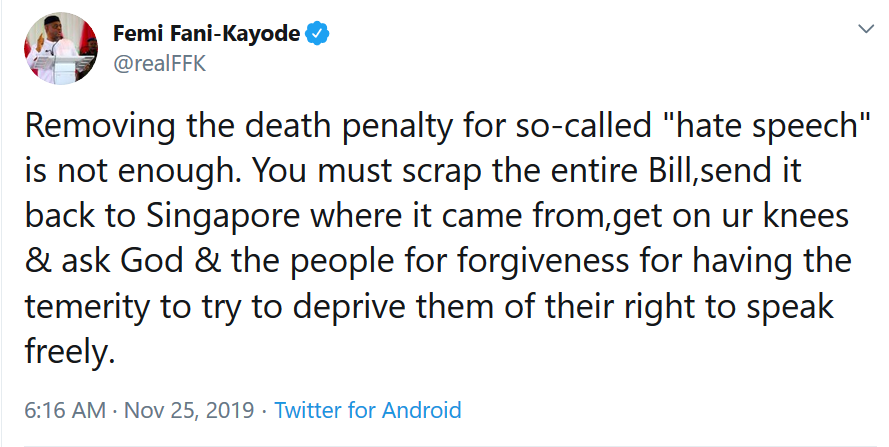 Senator Aliyu Sabi Abdullahi, who sponsored the ‘hate speech bill’ had, on Sunday, said that the Senate may amend the proposed death penalty clause in the bill. The lawmaker assured that the death penalty proposed in the bill would be amended by the Senate “when it is subjected to legislative input at the National Assembly.”

Abdullahi, who represents Niger North Senatorial District, said that the bill would undergo some fine-tuning to ensure that the clauses contained in its provisions to be passed into law reflected Nigerians’ views.

He added that the Senate welcomed contributions and inputs by critics and supporters of the bill, as these would go a long way towards giving Nigerians the much-awaited law that would address the disturbing trend of hate speech

However, Fani-Kayode expressed his displeasure and said: “Removing the death penalty for so-called “hate speech” is not enough. You must scrap the entire Bill, send it back to Singapore where it came from, get on your knees and ask God. Also, ask the people for forgiveness for having the temerity to try to deprive them of their right to speak freely” on his Twitter page.