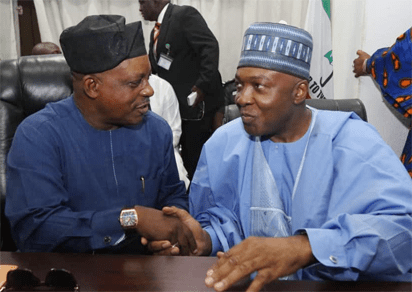 A stalwart of the Peoples Democratic Party, PDP in Kogi State, Hon. Toba Abraham has fingered the National Chairman of the party, Uche Secondus and former Senate President, Bukola Saraki as being behind the dilemma of the party in Kogi.

Abraham said the way and manner the duo ran affairs of the state party without regard for democratic principles led the party to its present predicament in the state.

Abraham spoke on Monday in Lokoja in reaction to Saturday’s defection of ex-reps member, Sunday Karimi (Yagba Fed constituency, 2011 – 2019) from PDP to APC.

He said, “The purported defection of Karimi is a calamity on his former party. Hon. Sunday Karimi was a humble and loyal party man who worked hard to ensure the sustenance and survival of the party not only in kogi west senatorial district but in Kogi state as a whole. Karimi remained one of the major financiers and pillars of PDP in Kogi State having helped to build the party to its present status.”

Toba said that PDP, under the leadership of Secondus led National Working Committee, NWC got it wrong by giving the soul of the party to Saraki who joined others to murder the party in Kogi State,

“It all started when Secondus and Saraki came up with their automatic ticket agenda by giving the party ticket to Sen. Dino Melaye, preventing others from the contest. Hon. Sunday Karimi was first disqualified by the party screening committee on a frivolous and fabricated reasons of not being a financial member of PDP all just to give way to Dino.

“Karimi must have felt in his own wisdom he could no longer continue to stay in the party that detests truth, abhors honesty but celebrates mediocrity. Though it was a difficult decision for him to leave the party, he had worked hard with others to build, but since it was obvious that the party under Secondus is not interested in party loyalty but highest bidder, there is no better time than now for him to bid the party bye,” he alleged.