Lagos public service can be best in West Africa - Sanwo-Olu 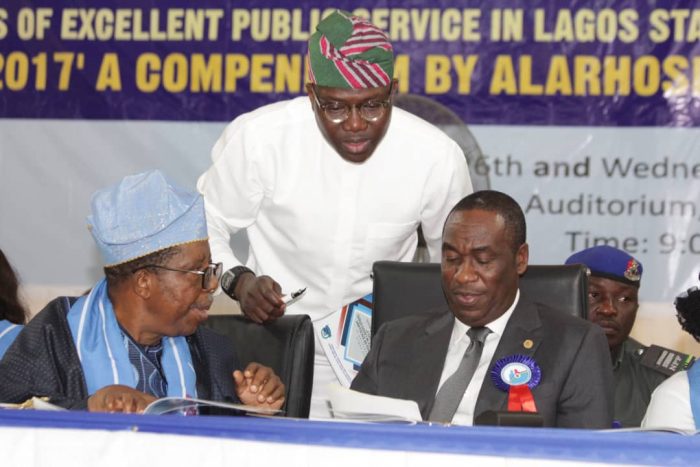 Lagos State Governor, Mr. Babajide Sanwo-Olu has disclosed that the State Public Service has the reputation of being the most progressive public service in West Africa as it has despite tough times continued to find great ways to improve the service offered and values provided to the public.

The Governor stated this on Tuesday speaking at the 6th summit and Public Presentation of a book titled “5 Decades of Excellent Public Service in Lagos State: 1967 – 2017,” a Compendium by the Association of Lagos State Retired Heads of Service and Permanent Secretaries (ALARHOSPS) held in Alausa, Lagos, Southwest Nigeria.

The governor, who was represented by the Deputy Governor, Dr. Obafemi Hamzat stated that growth and development in Lagos State could not have been made possible without the strong foundation which successive Heads of Service and Permanent Secretaries who worked so hard to lay and build upon.

Commending State Public Servants for their immense contributions to the successes recorded so far in the state, the governor added that “the vision of excellence that was given birth to over five decades ago has remained the same and continued to be the guiding light for generations.

“This shared vision, which is articulated in well thought-out policies and programmes and implemented with passion, patriotic zeal and sense of commitment is what we are celebrating today.”

Speaking further, Sanwo-Olu who thanked the ALARHOSPS for availing the state government the benefits of their wealth of knowledge and experience in Public Service and administration, commended them for their resolve to, even in retirement, continue to contribute to the development of the state as exemplified by their effort invested in the publication of the book “5 Decades of Excellent Service in Lagos State: 1967 – 2017.

According to the governor, “Through this effort, I am convinced that your wealth of experience which cut across all areas of human endeavours will be valuable and useful in the process of chatting a new course that will lead us to the next destination.”

He noted that the compendium was indicative of their intention, not only to celebrate the past achievements but also to key into the vision of Lagos State of the future.

Head of Service, Hakeem Muri-Okunola stated that the State had continued to be the foremost state in the federation in terms of growth and development as it leveraged on the wealth of experience of its past technocrats and further enhance consistency in the policy profile of the state.

He added the state had continued to create friendly atmosphere for investment to thrive and embarked on reforms in its business law to protect all parties when dispute arise in business.

Muri-Okunola, therefore, urged the conference in their deliberations, to focus on the T.H.E.M.E.S agenda of the present administration and join in activating the elaborate plan of implementable programmes that would take the state to the shared vision of delivering more habitable city and a smarter Lagos.

While noting that Lagos was recently adjudged by the World Bank as one of the most improved States in terms of Ease of Doing Business, the Head of Service emphasized that progress had also been made in the areas of mobilizing huge investments into critical sectors which would have direct positive impact on workers’ productivity, commerce and economy.

President, ALARHOSPS, Alhaji Mohammed Olagbaye stated that the association was inaugurated in 2014 by the state as policy advisors/think tank for the state government with specific request to organize two summits annually.

He described the compendium as the association’s permanent icing on the anniversary cake of Lagos @ 50, adding that it was the belief of the body to give back to the society the knowledge and experience which they had derived from the state public service.

The president added “With the resourceful men and women professionals as members, the association is poised to continue to offer itself as partner in progress for the achievement of the state’s excellent plans and programmes, not only to excel but also to take the state to the next level”.

The 865 paged book was reviewed by a former Commissioner for Education, Prof. Idowu Sobowale while Chief Tunde Fanimokun presented the book to the general public.