I am not APC member: Gov Umahi issues a disclaimer 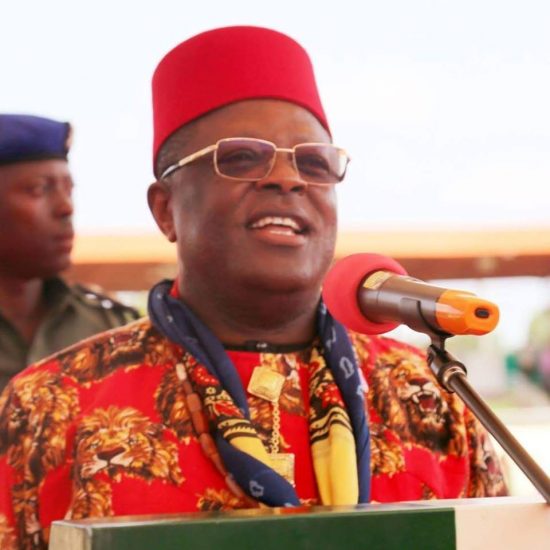 Embarrassed by reports of double dealing with both the PDP and APC, Ebonyi State governor Dave Umahi has issued a disclaimer.

Commissioner for Information and State Orientation, Uchenna Orji said the report was untrue, mischievous and misleading.

He said the Governor only cautioned those in the habit of defecting from one political to another to also know that he has friends and goodwill across political divides.

He also said that those who hide under partisan politics to peddle lies against the State government should know that even the APC members know the giant strides and virtues of his administration.

Orji added that the Governor’s style of governance was that of inclusive politics where partisan politics comes and goes but national interest and patriotism were the uncompromising.

“In their desperate attempt to cause disaffection against the State Government, they mischievously misrepresented the Governor as saying: ‘I am the only Governor that belongs to PDP and APC.

“This blackmail is nothing but a cheap and childish fabrication that is irritably displeasing to the sensibilities of the ordinary man.

“It is a common sense that no one party member in Nigeria can belong to another political party at a time.

“The Governor never said that he belongs to APC. He is unshakably a PDP chieftain and has been a great party man, whose track records as historic State Party Chairman and currently PDP Governor and leader in Ebonyi State are known and admired by people of good will.”

The commissioner added: “He only said that those who are in the habit of hiding under partisan politics to peddle lies against the State Government were on a frolic of their own as people of different political colorations including APC know the virtues of his administration.

“It must be noted that the Governor’s style of governance is that of inclusive politics where partisan politics comes and goes but National interest and patriotism are the uncompromising principles of his administration”.

“The essence of this disclaimer is to put the records straight for the information and right knowledge of the members of the public.”

The Peoples Democratic Party (PDP) also debunked the report as a blatant falsehood.

The Chairman of the party in Ebonyi State, Mr. Onyekachi Nwebonyi, in a statement on Tuesday, dismissed the claim, saying Umahi is still a bonafide member of the party.

He said the governor does not get involved in anti-party activities.

“The story is a blatant falsehood aimed at tarnishing the image of the governor and as well derailing him from his focus,” he said.

Governor Umahi, elected on the platform of the PDP, was quoted to have told a delegation that paid him a Yuletide Homage he is the only person that can engage in anti-party activities and nothing will happen.