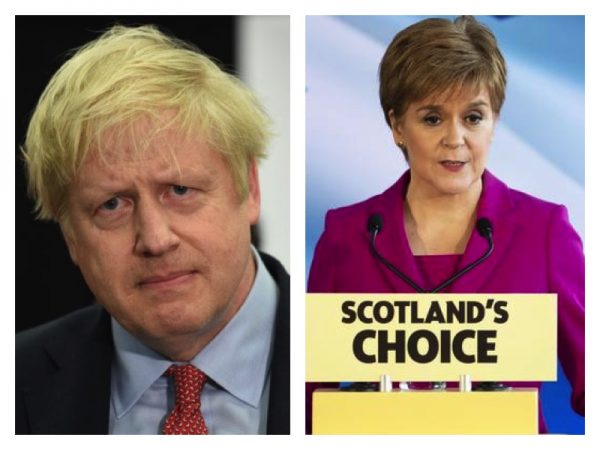 British Prime Minister Boris Johnson on Tuesday rejected a request by Scotland to hold another referendum on independence, but leader of the Scottish National Party Nicola Sturgeon slammed the response as predictable and insisted Scotland will exercise its right to choose its future.

In a letter to Sturgeon, Johnson noted that a previous referendum held in 2014 had been billed as a “once in a generation” vote.

Scots voted then by 55 percent to 45 percent against breaking away from the rest of the United Kingdom, and Johnson said Edinburgh had agreed to abide by that decision.

“The UK government will continue to uphold the democratic decision of the Scottish people and the promise that you made to them,” he wrote.

“For that reason, I cannot agree to any request for a transfer of power that would lead to further independence referendums.”

Sturgeon wants Scotland to have another referendum in 2020, and last month asked London to transfer the powers to the Scottish Parliament needed to make this happen.

She argues that the Brexit referendum in 2016 is a justification for allowing Scots to vote again on secession from the UK.

Across the whole United Kingdom, 52 percent voted for the UK to leave the European Union but within Scotland, 62 percent wanted Britain to stay in the EU.

The UK will leave the bloc on January 31.

“Tories are terrified of Scotland’s right to choose — because they know that when given the choice we’ll choose independence,” Sturgeon said of Johnson’s Conservative and Unionist Party.

“Tories have no positive case for the union — so all they can do is attempt to deny democracy. It will not stand.

“This response is predictable — but also unsustainable and self defeating. Scotland will have the right to choose.”

Sturgeon said the Scottish government would set out its response and next steps before the end of the month, and would again ask the Scottish Parliament “to back Scotland’s right to choose our own future”.

In the aftermath of the SNP’s impressive showing in the general election in December, Sturgeon reaffirmed her desire for Scotland to break away from the union.

“People in Scotland have made it very clear they didn’t want Boris Johnson as prime minister and the don’t want Brexit, and they want Scotland’s future in Scotland’s hands,” she noted