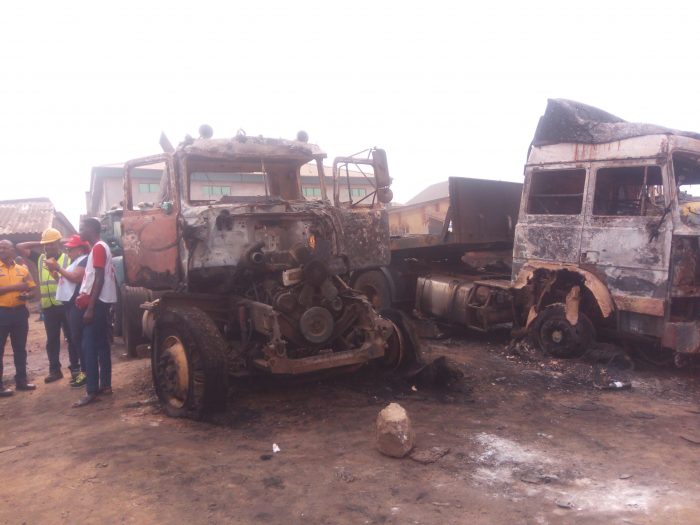 Trucks burnt in the explosion

The fire was put out last night by emergency responders after the pipeline exploded around 7:45pm as a result of activities of vandals.

Director General, Lagos State Emergency Management Agency, LASEMA, Dr. Femi Oke-Osanyintolu said on Monday at the scene of the disaster that the death toll had moved from three to five, which included three male adult, a woman and a little girl.

He disclosed that the number of truck burnt has moved to 33 from the initial 11 released last night, adding that 11 houses were burnt instead of the initial seven reported.

Oke-Osanyintolu added that three cars, three tricycles and 17 shops were also burnt in the inferno, adding that 20 people who got injured were treated on the spot and released.

He sympathised with those who lost their lives and appealed to citizens to put the safety of their lives first in anything they do.

The LASEMA boss disclosed that when the fire started, the emergency responders were able to curtail it from spreading to other areas by 9.00pm and that by 11:30pm, the fire was put out.