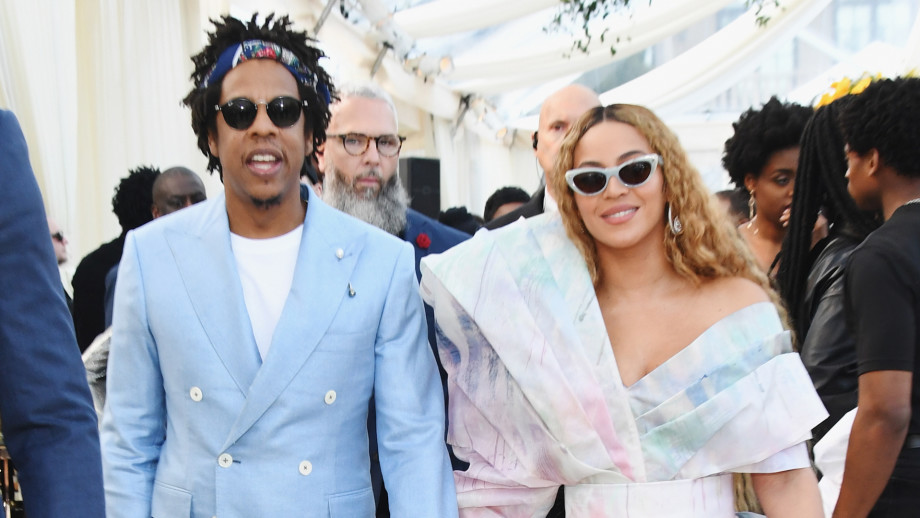 Power couple, Jay-Z and Beyonce have been tagged as ‘disrespectful’ after drawing attention on Sunday while attending Super Bowl LIV for staying seated during the performance of the national anthem.

The Carters along with their daughter, Blue Ivy, were photographed sitting during Demi Lovato’s anthem performance ahead of Sunday’s big game at the Hard Rock Stadium in Miami Gardens, Florida, and Twitter users were not having it.

Demi Lovato’s anthem rendition amazed everyone but it looks like the Carters either didn’t care enough to support Lovato or were trying to make a political statement.

This is coming after Jay Z the announced his partnership with the NFL to focus on consulting on the Super Bowl halftime show and helping with the league’s social initiative efforts,

Some social media users belived they were trying to make a statement, like that of athlete Colin Kaepernick, who famously took a knee during the anthem as a peaceful protest against police brutality and has been severely bashed in the past by US president Donald Trump for disrespecting the US flag by kneeling during the anthem.

How do we stop racism, systematic oppression, and police brutality?Jay-Z and the NFL: Let’s sell t-shirts and throw concerts. That’ll really shake up the system.

I honestly don't give a fuck. You can't force patriotism, and none of this should be shocking or surprising.
https://t.co/lfLaFD0Ccv

Trust me, there's nothing 'D-list' about Beyonce. You must be thinking about the so-called performers Trump FINALLY found for his empty Inauguration.BTW, the Anthem was written by an avowed racist slave owner who hated blacks like Beyonce and Jay-Z. It's their call!#BlackHistory

I don't think so, I think they only showed how disgusting they both are… pic.twitter.com/baq7imL969

#Beyonce and #JayZ are both so obnoxious. I'm embarrassed she's from Houston. pic.twitter.com/zbEFK85fXU

Terrible role models for their daughter & for the country.

I served in the US Military for over 20 years proudly, and I did, so that people could exercise their 1st amendment rights – like, for example, not having to stand for the National Anthem. It is their right to not stand if they choose. Freedom. pic.twitter.com/g66y5EJEkc

Would you expect anything else from those two. They have been Oppressed by the white man. Haha JAY Z and his idiot wife are just like all the other blacks who feel sorry for themselves and take it out on Whites https://t.co/dAhuT70Das

Me either & l will continue to ignore @NFL and NOT watch. Jay Z & family don't speak for me #kapernick @karenhunter you are NOT alone. https://t.co/xOVxu3AnIe