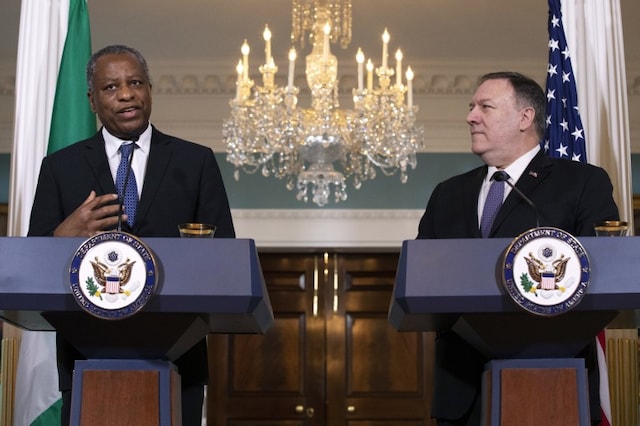 Onyeama with Mike Pompeo on Tuesday in Washington

Nigeria’s foreign minister, Geoffrey Onyeama said Tuesday that he is confident his country will be removed soon from a list of countries facing visa restrictions, because it is already addressing U.S. concerns.

After meeting with Secretary of State Mike Pompeo at the State Department, Geoffrey Onyeama acknowledged he had been “somewhat blindsided” by the visa restrictions announced Friday as he was preparing to leave for Washington for previously scheduled meetings with U.S. officials.

According to a report by Washington Post, Onyeama said Nigeria already had been working on ways to share information with international law enforcement about lost and stolen passports, as well as other security issues cited when the Trump administration decided to stop granting immigration visas to citizens of Africa’s most populous nation.

“We have been able to tick most of the boxes with regards to lost and stolen passports,” Onyeama said during brief remarks to reporters as he stood beside Pompeo.

Vowing to make the data available to Interpol, Onyeama added, “Hopefully once that has been achieved, we look forward to being taken off this visa restriction list.”

Immigrants from Nigeria and five other countries no longer will be eligible for visas allowing them to live in the United States permanently, the White House said Friday.

Many Nigerians who have long considered the visa policies of Europe and the United States racist were angered about the new restrictions, scheduled to take effect Feb. 21.

The travel ban would prevent tens of thousands of people from immigrating to the United States. Nigerians still could get tourist and business visas, though they are difficult for them to obtain because so many people from the country overstay their permitted time, U.S. officials say.

In addition to Nigeria, the new visa restrictions apply to Sudan, Tanzania and Eritrea in Africa, as well as Myanmar and Kyrgyzstan in Asia.

Pompeo, apparently pleased with Nigeria’s efforts, announced that the United States would give $40 million in humanitarian aid to the West African nation. That is in addition to about $350 million in aid Washington has provided Nigeria in the past year.

The United States and Nigeria have been allies in fighting militant Islamist groups, including Boko Haram and an offshoot of the Islamic State in West Africa.

“In part due to this terrorism threat, on Friday President Trump announced the suspension of immigrant visas for Nigerians because Nigeria has room to grow in sharing important national security information,” Pompeo said, but he added, “I’m optimistic that’s going happen.”

The United States also played a role in an agreement that will give Nigeria $308 million seized from bank accounts of former military dictator Sani Abacha.

The money is slated to pay for major road projects, and Nigeria’s government has promised to repay any money stolen through corruption or fraud.

The return of the money follows a 2014 U.S. court ruling authorizing the seizure of $500 million of cash laundered by Abacha in accounts around the world.