End of the road for criminal gang operating in Abia, Enugu, Imo 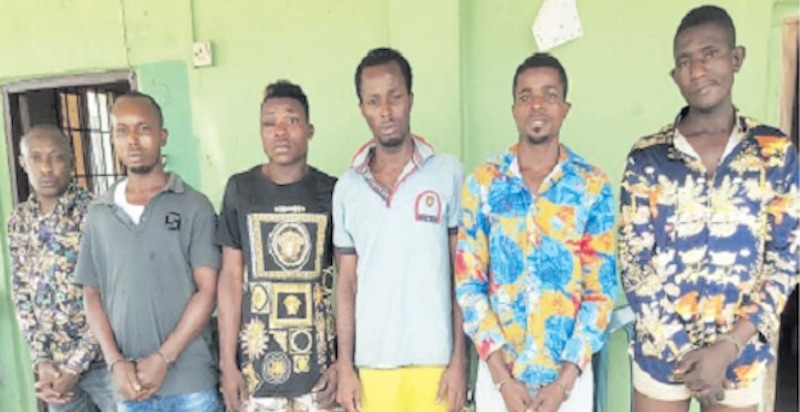 A 16-man suspected armed robbery and kidnap gang who operated in eastern Nigeria axis has been smashed by the operatives of the Inspector General of Police Intelligence Response Team(IRT).

The gang specialised in raping female victims and kidnapping rich lawyers and reverend fathers who keep church money. The gang members operated mainly in Enugu, Imo and Abia states, with their camp in Osisioma Local Government Area of Abia State.

The commander of IRT, a Deputy Commissioner of Police, DCP Abba Kyari, who led the team to the states arrested 16 members of the gang like fowls.

Five cars and 10 mobile phones belonging to different persons, kidnapped by members of this gang as well as one Ak47 rifle, one pump action gun, five locally made pistols and cartridges, were recovered from the suspects.

The suspects confessed to several kidnappings, including that of a Reverend Father, who reportedly paid N400,000 for his release.

One of the gang leaders, Maduabuchi Amamba, a.k.a. commander, 30-year-old and a native of Osisioma Local Government Area of Abia State, in his confession, said: “I’m not married, but I have a fiancee who had a child for me. I am a kidnapper and I started early last year and it was my friends, known as SS, Muchocho, Ojaba and Stephen who lured me into crime.

“I met these boys at Umugbede area of Osisioma area of Aba,where we were smoking Indian hemp and cocaine. I started taking cocaine when I met my friends.

“However, before I met these my friends, I was a vigilante man working at Nkpor area of Anambra State. I did that for about one year. It was my friend, Chiemeka, that introduced me into this business. My father was sick and there was no money to treat him. Then, Chiemka a.k.a Niggar, took me to the joint where I met my other friends.

“In Januray 2019, we went for a robbery at Amafife area of Osisioma, where we robbed a woman coming back from her shop and we snatched her bag.

“Niggar said he had been monitoring the woman for a long time. We were four that went for the robbery and we found N35000. We went with two pump action guns, which I was using as a vigilante operative in Nkpor. I took 75,000 as my share.

“Later, we kidnapped a 32- year- old female doctor. The woman resides at Immaculate area of Aba. It was someone residing in the area, known as Chucks, who brought information about the woman. We kidnapped her when she was trying to drive into her compound in a Toyota Highlander jeep. We were five in number that went for the operation and we took the woman to Ojaba’s house at Amokpoife in Osisoma area. The person who brought the job for us said that the woman was so rich that she could afford to pay N20million. Then, I called her husband and demanded N20million but surprisingly, the husband said he would pay only N500,000, but he ended paying N2million before his wife was released .

“It was Ifeanyi, watching over the woman; who raped her. I was not initially aware that Ifeanyi raped the woman he was the one looking after the woman at the camp, but after the ransom was paid, I got information about what he did. I asked him and he confessed that he actually slept with the woman four times.

“We stopped the man along the way while he was driving; we blocked him with our own vehicle. He spent three days with us in our camp. I slept with him for just one night. I left the camp and went home because I got news that my father was dead.

“I later learnt it was Godswill that was beating the victim. I negotiated for the ransom and I demanded the sum of N1.5million because I needed money urgently for my fathers burial. Unfortunately, the man paid us the sum of N200,000 and I got N34,000 as my share.

“My friends later took the lawyer’s car and sold it. I was aware that the man’s car was sold at the time we kidnapped him. It was after our arrest that I learnt that. I also attempted to kidnap a man driving a Toyota Avalon at Obingwa area of Aba but the man sighted us and ran away. We left with his car and I sold it to Mr Sunny for N200,000. We later kidnapped a man at Opkulumuobo, driving a Lexus 330. We traced the man to his house. The time was 9:00pm; we followed him to his gate; we kidnapped him and took away his vehicle.

We also sold the man’s vehicle for N300, 000 but the man ran way from our camp. We later discovered that it was the people that worked with with us who allowed the man to escape .

“However before then, ‘SS’ had seized my rifles and run away with it but I got another friend, Onye, and he gave me a rifle I was using. I called ‘SS’ and I asked about my rifle; he asked me to come back but, unfortunately when I went to him, I was arrested by the police.”

Another suspect, Nwazuoke Ejima, also a native of Osisioma Local Government Area of Abia State, said: “I am 33 years of age. I am from Umuoyeringwa in Osisioma area of Aba. I have only primary school education because I have no father. My father died while I was still very young and my mother is just a farmer. I learned panel betting, but my master chased me away because I couldn’t pa y him. I went back to the village and there was a man called Fabian who taught me how to become a kidnapper in 2017.

“He was the first person who was kidnapped in Isialangwa. I followed them with my bike and we kept the man at Egbede village at Osisioma. I didn’t know how much that was paid as ransom but I was given N20,000.

“The second operation was around Umuahia Expressway. It was in the nigh; they kidnapped a man and I was given N5000 for my role. However, I stopped working with him because he wasn’t giving me good money .Then I had no choice than to leave him and find my way.

“Later, I got a locally made pistol and showed Fabian. He said what I had was a toy. He then brought his own, which was an AK 47 rifle. We then kidnapped a man at Isialangwa and I was given N40,000. I then bought a pump action for N400,000. I became very angry with him. I left and formed my own gang. It was Ojaba that helped me form the gang. He called me after he was released from the prisons, but he didn’t tell me how he got my number but he told me that he had two people who had two pump action guns; I met him and two others at Amakife.

“I also met commander and Nigge and gave them the job at Imaculate. We kidnapped a woman and we took away her car. We dropped the woman at Amakife. The woman paid N2million and we sold her vehicle. One of us slept with the woman.

“I got a total of N390,000 because I cheated my gang members. We also kidnapped a man at Isialangwa, who is a lawyer. We kidnapped another man at Ariaria Junction. We took the man to my village in Amakifie and kept him in the bush. The man paid N500,000. I collected the money and ran away with it. I used the money to buy a pump action gun for N480,000.

“I used my pump action gun and that of commander to kidnap a man, who was coming out from his shop at Opkurumogbo. I later I heard that the man ran away. We also kidnapped a Reverend Father, Obinnna; Mushosho, Sky and I; we kidnapped the reverend father at Umuka area of Abia State and took him to Nekaro village. He spent four days with us and we took N400,000 from the man’s family. While we wanted to sell the father’s vehicle, we had an argument in the vehicle, because the father’s phone was missing and we we were looking for it. In the process, we had an accident with his vehicle and Obinna left his phone in the vehicle, while we were trying to escape.

“On January1, 2020, we went to kidnap a man at Ariaria road. I went with one Chinonso and Victor, and we went with a pump action gun, a pistol and a double barrel gun. We blocked the man with a car; we kidnapped a man and a woman; they were carrying three people. They kidnapped the first person with a lexus and used his vehicle to kidnap the man and the woman driving an Infinity vehicle. We abandoned the car and took the three of them to Umuokiri and kept them in an abandoned building.

“We then left all the victims with my boys but in the morning, I learned that SARS came, attacked and killed two of his boys and they rescued the victims. The next day, I started calling one Chinonso. I didn’t know he had been arrested and I wanted us to go for another job.

“I was at Toyimas junction when the police came to arrest me. I gave them my gun and I promised that I will not do it again. I know that the people I have are bad criminals.”