Big fight of decade: The baddest man vs the Gypsy King 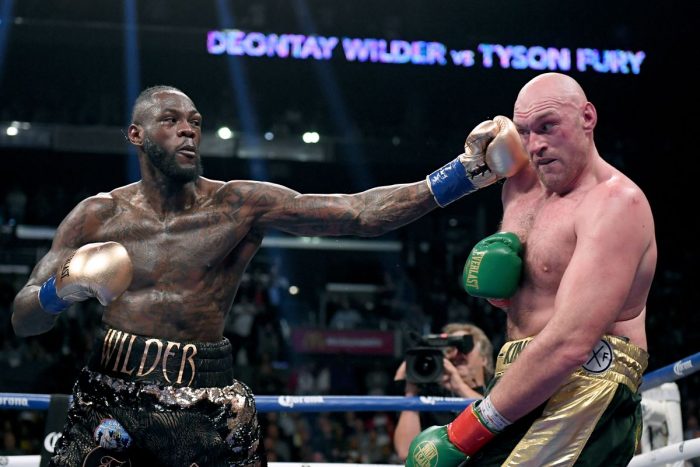 Wilder and Fury: The last fight

On Saturday night at the MGM Grand Garden Arena, Las Vegas, the biggest boxing showdown of the decade will take place. It is a bout the entire world is waiting for. The money spinning event will have millions of viewers all over the world glue to their TV sets and on internet. What is at stake? The WBC belt currently under the grip of Deontay Wilder, popularly known as the Bronze Bomber. Wilder is being challenged by Linear Heavyweight champion, Tyson Fury, popularly known as the Gypsy King.

Wilder, is regarded as the ‘baddest man’ in the boxing world. He is a knockout specialist. He is a wild man, brutal and carry in his right hand one of the heaviest punches in boxing history. Many have caved in with that punch. He has fought 43 professional fights and lost none. He has 41 knockout out of the 43 fights and one draw. That draw was against Fury, the giant he is giving a rematch.

On the other hand, Fury has also not lost a fight, he has fought 29 professional fights, recording 20 knockouts and a draw. Fury’s mobility is a plus for him. With a long reach, he has brutally beaten opponents and he is tipped to upset Wilder in their bout this night.

In the last fight 15 months ago, a Fury who just came back from a drug ban, almost upset Wilder. Fury was clearly leading on points, but as a wild man, Wilder scored two brutal knockdown against Fury. The 12th round knockdown of Fury would have had the referee stopped the fight because Fury was knocked out cold, but the referee gave the mandatory 10 counts, and surprisingly, Fury stood up and held on. Fury thought he had won the fight but the judges scored it draw. The boxing world was unhappy as they thought Fury had been robbed. That necessitated the rematch which has been fixed for Saturday, US time and 5.00GMT on Sunday.

Already, ringside tickets have been changing hands for up to $11,000, according to reports. Promoters also predict the event could generate more than 2 million pay-per-view sales in the United States alone. These are some of the developments around the much anticipated heavyweight fight at the MGM Grand Hotel in Las Vegas.

However the two gladiators are slightly overweight than when they first met more than a year ago. Wilder weighed a career high, but will still be 42 pounds lighter than Tyson Fury for their much-anticipated heavyweight rematch at the MGM Grand Hotel in Las Vegas.

Wilder weighed in at 231 pounds (105 kg) and Fury tipped the scales at 273 pounds on Friday as both boxers weighed in much heavier than they did for their first fight 14 months ago. Wilder is 18 pounds heavier and Fury added 15 pounds to his frame.

Wilder has boasted that he will Fury will not escape knockout tonight.

“We’ve got unfinished business, and this time you won’t be getting back up after I lay you out. The heavyweight rematch you all have been waiting for goes down on February 22nd live on Pay-Per-View,” Wilder boasted.

“I looked at my record and realized I was running through guys and knocking them out. You don’t just go in and knock a human out based on will, you really have to have the power to do so, and through that, I realized I had something different. I am just applying my service to my greatness and I am going to use my power up until I can’t use it anymore.

“My power is God-given; I don’t have to do anything at all. I don’t have to lift weights or do a special type of cardio; it’s born with me. It’s an amazing feeling to have it and to be in this position, out of all the things I could be doing, God placed me in this position. As fighters, we are free in this sport, we say as we please with less consequences, so when I use my platform, I use it well. If people see what I do in my occupation and see that I bring the greatness out of myself, then that will translate to people that look up to me.

“Anything is possible in the ring, but it comes down to if he can back up his words. That is where your preparation for the fight comes out. One thing for sure, though, I am a great fighter on my back foot. That’s when I’m able to really time you and set you up and have you run into my own traps. He has a lot of things going on in his camp so that tells you how nervous he is.

“I don’t believe anything Fury says. I think he is just trying to butter me up and use a lot of mind games. He did that in the first fight to try and steal rounds, so we were lucky that we had experienced judges that weren’t influenced by that. I am not concerned with what I say, I am more focused on what he does. I am a man of action,” he said.

According to Wilder, “I am planning for everything, but I think when coming forward doesn’t work for him, he will resort to what he knows. He may try to come forward at first, but once he feels my power, that will stop quickly.

“Round 12 has been in his mind since day one, that’s why he ran away from the rematch. In the back of Fury’s mind, he will think about how I gave him a concussion and how he had no idea how he even got on the ground. So, I do believe that round is in his head, and if he says otherwise, he is lying.

“I deserve to be here because of the talent I have and what I am able to do. And I have been knocking guys out for 12 years, so this is nothing new to me. I mean what I say, and I say what I mean, and I am exactly where I am supposed to be.”

But Fury has had more trash talks than Wilder, boasting that he planned to knock him out.

“No problem. He couldn’t keep me down. Also, people go on about him being the biggest puncher in heavyweight history but it’s about who you’ve fought.

“I’ve almost always been in fights I could lose. Deontay’s fought 35 bums. Tomato cans they call them here in the States. Duck-egg dummies brought in to pad his record. He’s only had seven or so real fights. ‘The two KOs he’s had since our first fight were that big idiot Dominic Breazeale who walked onto a big shot in the first round and Luis Ortiz who is so old – 50 – that my nine-year-old son could knock him out in the eighth round when his legs are so far gone that he can’t walk.

“Deontay’s punches will bounce off me because I’m bulletproof. If I cannot beat Deontay Wilder then I’m no good. I will not go down as a great or a champion. I would just go back to Morecambe and never sniff boxing again. And I doubt I’d ever see him again. He wouldn’t come to Morecambe and I’m certainly never going to live in Alabama.’

“The only really good man he’s ever faced is me and I was just coming back from three years out, weak as a robin and with coat-hangers for shoulders. If he couldn’t beat me then he sure can’t beat me now.

“Actually the two knockdowns apart it was my easiest. Steve Cunningham – that cruiserweight who had me over once in New York – was my toughest fight. He was hard and a good boxer. Deontay is a very limited boxer, albeit one with a big punch but not as hard a hitter as Wladimir Klitschko and he couldn’t knock me over or out.

“What I saw 14 months ago was exactly the Wilder I expected and he will be the same again. The difference is I’m stronger and fitter now and still younger. And at 34 he ain’t going to get any better. He’ll either plateau or slide.

“I believe I out-boxed him. To guarantee a win, I need a knockout. I don’t want another controversial decision – I want a defining win.”

One thing is clear, Wilder’s strength lies in his right hand power. He relies so much on that. Wilder is raw, unpolished, brutal and slow. A good fight who can avoid his right hand and dances round the ring will definitely score a decision win against Wilder. That is the advantage Fury has over Wilder, Fury is fast, mobile and crafty. He can decision Wilder if the fight goes on to round 12. This is what he will be aiming at as they meet tonight.

But can Fury escape Wilder’s brutal right hand? The last time they fought, Fury was knocked down twice and managed to continue the fight, but with Fury’s last fight, where he suffered deep cut in his eye against Swede’s Otto Wallin, in the third round, it is doubtful if he can avoid Wilder’s heavier punch for the 12 rounds. If Fury does sustain a deep cut against Wilder early in the contest, it will be a bitter pill for him. More so, Fury has a weak chin, Wilder’s right hand, if it does land on those plummy chin, it may be over.

My take: Wilder must score a knockout against Fury to retain his WBC heavyweight title. He must aim at that because he can’t keep pace with the boxing prowess of Fury. On the order hand, Fury must avoid Wilder’s right hand like a plague. He must hold on to 12 rounds to decision Wilder, but can he do that against the baddest man in boxing history?