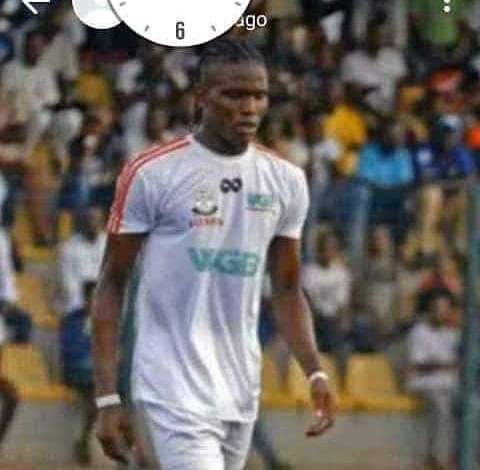 Kazeem Tiamiyu, a.k.a Kaka: killed by a SARS policeman

The Ogun Police Command has said the footballer that was killed on Saturday was knocked down by a hit-and-run driver and not by a policeman as widely reported.

The state Police Public Relations Officer, Abimbola Oyeyemi, made this known in a statement made available to the News Agency of Nigeria (NAN) on Sunday in Abeokuta.

Reports on Saturday alleged that an operative of the Special Anti-Robbery Squad (SARS) had killed the Assistant Captain of Remo Stars FC, Kazeem Tiyamiyu, after he was arrested.

But Oyeyemi said the late footballer, who was popularly known as Kaka, died while trying to escape after his arrest.

He claimed that the footballer was knocked down by a vehicle when he attempted to cross the highway.

According to him, the footballer was also arrested for wearing a military cap and not on suspicion of internet fraud.

He further pointed out that the operative, who arrested the deceased, was an inspector attached to the Zonal Intervention Squad (ZIS), Obada, and not a SARS operative.

“A police inspector attached to Zonal Intervention Squad, Obada-Oko, in Abeokuta, was said to have received an information about the deceased that he was always putting on military apparels knowing fully well that he was not a military officer.

“Based on the information, the inspector went to Sagamu and saw the deceased putting on a military cap consequent upon which he got him arrested.

” On the way to Abeokuta, the vehicle they were traveling in developed a mechanical fault and while the officer was trying to rectify the fault, the arrested person jumped down from the vehicle to escape.

“In his bid to run across the road, an on coming vehicle which was on high speed knocked him down and he died on the spot,” he said.

Oyeyemi disclosed that the Commissioner of Police had ordered the immediate arrest of the officer for his unprofessional act of leaving an arrested person alone in the vehicle.

“A full scale investigation into the case by the State Criminal Investigation and Intelligence Department has commenced,” he said.