The king has returned to the top of the throne - Fury 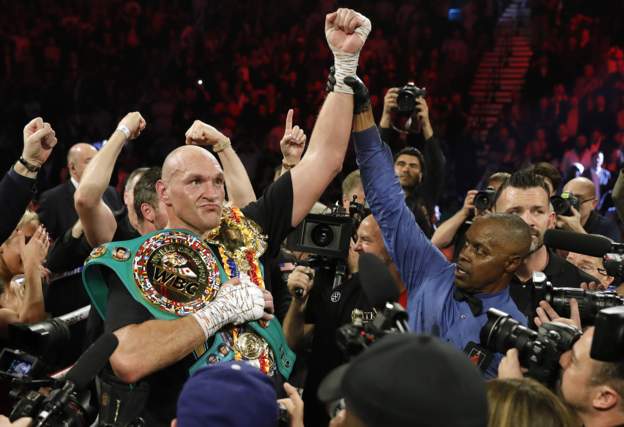 “I want to shout out Deontay Wilder, he showed the heart of a champion. He got up and battled onto round seven. He is a warrior, he will be back and be champion again.

“But the king has returned to the top of the throne.”

Fury knocked out Wilder in the seventh round to win the WBC Heavyweight championship title belt.

With the victory, Britain’s Fury has thus become the world heavyweight champion for the second time.

Fury produced a brutal and brilliant masterclass to batter Wilder to a seventh-round stoppage.

He floored the American twice in the fight before Wilder’s corner threw in the towel in the Seventh round.

The Briton dominated the fight from round one to the end, with Wilder not in the contest all through the period.

Wilder had no answer to the superior fighting prowess of Fury and he was outclassed in every department.

Wilder was not like the ‘Bronze Bomber’ he claimed to be in this fight, but Fury was truly the Gypsy King.

The American was first floored by Fury in the third round and later in the fifth round.

A jab and right hand – the combination Wilder has wiped men out with repeatedly – sent the American down in the third, stunning the MGM Grand Arena.

Wilder fell again before the round was out – this time a slip – and was ragged under the pressure, before a right and left hand to the body sent him down in the fifth.

Fury, 31, delivered everything he had promised, transitioning from his hit-and-move style to overpower, outwork and bully his previously undefeated rival until the towel came in during the seventh round.

This was more than a world title win, it was a statement – and as Fury was held aloft by his corner after victory was sealed, the days of depression, weight gain and despair that cost him the belts he claimed in 2015 seemed a lifetime away, BBC reports.

The American has now lost his unbeaten run, which ended after his 44th fight, while Fury remains unbeaten after 30 fight.