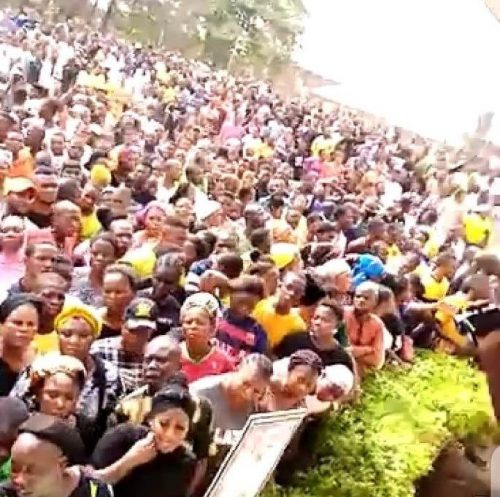 Five person have been feared dead in a riot that engulfed Sagamu area of Ogun State, Southwest Nigeria on Monday.

Two policemen and three civilians were said to be among those who died.

Hundreds of protesters, including women and children thronged the streets in Sagamu to protest the alleged killing of Remo Stars Football Club’s Assistant Captain, Tiamiyu Kazeem by operatives of the Special Anti-Robbery Squad, SARS on Saturday.

War is going on in Sagamu now ooo pic.twitter.com/zyw8yNEnFu

The protesters were angry with the unwarranted killing by SARS operatives and decided to stage a protest in the area.

Tiamiyu, a player with Remo Star Football Club, was killed on Saturday after policemen attached to the Zonal Intervention Squad (ZIS) arrested him on allegations of being a Yahoo Boy.

On Monday, there were sporadic shootings by the police during the protest. The protesters, who took to the streets also stormed the Palace of the Akarigbo and the Paramount Ruler of Remoland, Oba Babatunde Ajayi, demanding justice for the deceased.

videos from the ongoing peaceful Protest in Sagamu over alleged killing of Footballer by SARS Operatives
.#endsars #sagamu pic.twitter.com/98Rvx9G1T5

The protesters condemned the incessant brutality and indiscriminate arrests by law enforcement agencies in the town and its environs.

A former governor of the state, Gbenga Daniel, was sighted at the palace where he was said to have calmed frayed nerves.

The protesters at the palace were shouting “No more SARS, no more SARS.”

RT @PopeGabson: Another 2 protesters have been shot in the ongoing #EndSARS Protest in Sagamu by @PoliceNG Pls RT @Gidi_Traffic pic.twitter.com/RMbs3IRjiO

Armed policemen were deployed deployed in the town to forestall a breakdown of law and order.