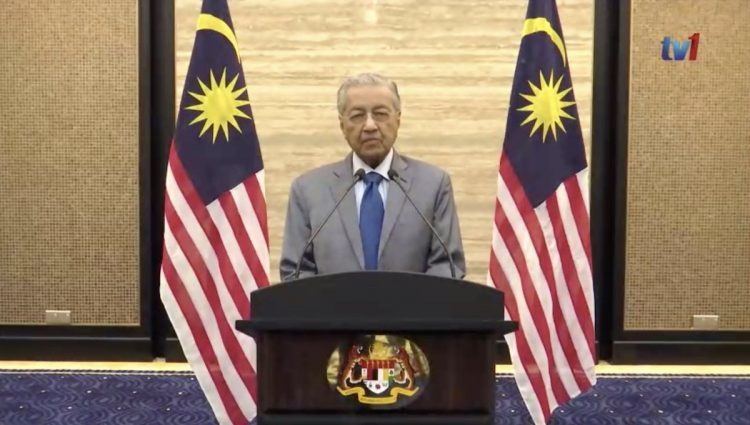 Dr Mahathir Mohamad, now Malaysia’s interim prime minister has explained why he resigned as the prime minister, in the first place, while also apologising to compatriots for the suddenness of his action.

Mahathir spoke today in a TV broadcast. Here is the full transcript as published by the New Straits Times:

Firstly, I wish to apologise to all Malaysians over the country’s rather chaotic political situation, which may have caused consternation among you.

As we all know, I had submitted my resignation letter as the 7th Prime Minister to the Yang di-Pertuan Agong.

Nevertheless, I was later summoned to meet the Yang di-Pertuan Agong, and after a more than an hour-long discussion, the King consented to my resignation and later, decreed that I should become the interim prime minister.

There are many reasons for my resignation but suffice to say, I felt that I had support from all sides to the extent that I was unable to choose a side.

In addition, there were also accusations that I never meant to let go of the position and was power-hungry.

As a result, I resigned because I saw that to politicians, both the victors and the losers, what was most important to them was which party would rule.

I resigned because I do not see power and position as the “be all and end all” to my goals. To me, power and position are a means to an end, or a tool to achieve an objective. And this objective is, of course, for the betterment of the country. As a result, I resigned because I saw that to politicians, both the victors and the losers, what was most important to them was which party would rule.

In truth, I had promised to resign to allow the Dewan Rakyat to decide who would be my replacement. If it is true that I still have support, then I will return. If not, I will accept whoever is chosen.

So, the opportunity to change the leadership is there. I however feel that since I have the support of both sides, it is not yet time for me to resign.

I ask to be given time. But my party, Bersatu decided to leave Pakatan Harapan. There are also those from other component parties who are set to leave. With this, the Pakatan Harapan government would collapse.

The effect of Bersatu supporting Umno and Pas is that the parties which lost the election would go on to form the government. This government would be dominated by Umno, by virtue of it being the biggest party.

I can accept Umno members who leave the party and join another party. But Umno would be joining this unity government as Umno itself. This I could not accept. So I had to resign.

As a human being, I am not averse to making mistakes. I seek forgiveness if my act of resigning is wrong.

The Yang diPertuan Agong decreed that I should be appointed as the interim prime minister. I know that what I am doing now is being opposed and rejected by many; some may be in support. I am not looking to become popular. I am only doing something which to me would be best for the country.

Politicians and political parties place too much emphasis on politics until they forget that the country is facing economic and health issues.

In my opinion, right or wrong, politics and political parties have to be cast aside for now. If I am permitted, I will try to establish an administration which does not favour any party. The only priority would be the interests of the country.

This is what I will try to do if given the opportunity. I pray and ask Allah SWT for guidance in my endeavour.