Another batch of 116 Nigerians repatriated from Libya 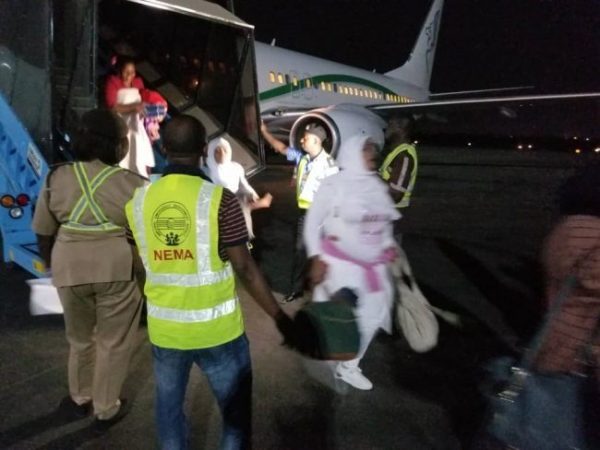 NEMA officials receiving the Libyan returnees at the MMI Airport on Wednesday, Feb. 26 in Lagos.

The National Emergency Management Agency (NEMA) said it has received another batch of 116 Nigerians, who volunteered to be repatriated back to Nigeria from Libya.

According to him, the returnees were brought via Al Buraq Air Boeing 737 Aircraft with flight number UZ 188/26 and registration number 5A-DMG-MJI.

He said that the returnees were brought by the International Organisation for Migration (IOM) and European Union on the platform of the Assisted Voluntary Returnees (AVR) Programme.

The News Agency of Nigeria (NAN) reports that other agencies that received the returnees included the Nigeria Immigration Service (NIS) and the National Agency for the Prohibition of Trafficking in Persons (NAPTIP).

One of the returnees, who identified herself as Sola Adeleke, 38 years old, appealed to the Federal Government to deal decisively with human traffickers, who mislead Nigerians with fake information on greener pastures that do not exist outside the country.

Adeleke, an indigene of Ibadan, Oyo State, said the traffickers subjected their victims to inhuman treatment they would never expose their children to.