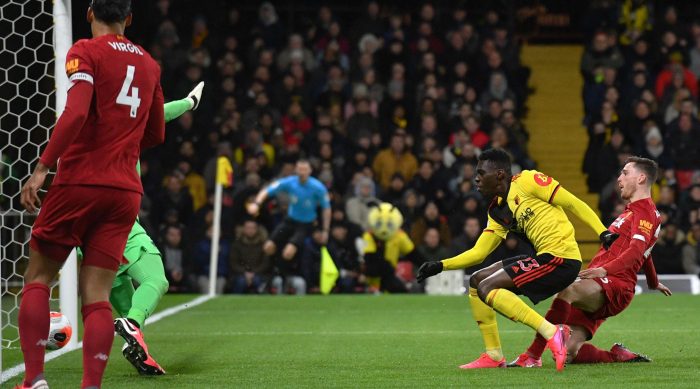 Struggling Watford have ended Liverpool’s 44 premier league unbeaten run with a shocking 3-0 victory over the Reds on Saturday.

It was a stunning display from the home side who outplayed Liverpool in every department.

Liverpool was aiming to break Arsenal’s all time 49 unbeaten run and lost on its 45th game. Liverpool have also lost their 27 games unbeaten run in the premier league this season.

After a goalless first half, determined Watford put Liverpool to the sword, scoring three goals to end Liverpool’s unbeaten run in the premier league.

The host worked it from a throw-in, Abdoulaye Doucoure turned his man and dug out a cross and there was Ismaila Sarr to poked home, getting across Andrew Robertson to find the net from close range.

On 69th minute, Sarr made it 2-0 for Watford. It was a brilliant goal from Sarr who got his brace.

Sarr took it with such composure, waiting for Alisson to go down and lifting the ball over the Liverpool keeper.

It all started with Will Hughes’ clever back heel on the touchline, and suddenly Sarr was sprinting through on goal.

Watford ended Liverpool’s hope of coming back with a brilliant third goal on 73 minutes.

Watford hoisted it long, Ismaila Sarr reads Trent Alexander-Arnold’s back pass and got there before Alisson.

The Watford man took his time, picked out Troy Deeney and the Hornets’ skipper fired into the net from the edge of the box with the Liverpool keeper stranded.