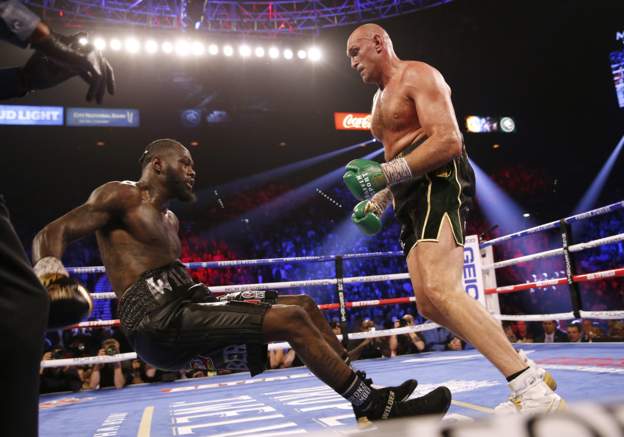 Deontay Wilder’s video message to Tyson Fury has given the go-ahead to part three of the saga between the two professional boxers.

Tyson Fury knocked out Deontay Wilder in the seventh round to win the WBC Heavyweight championship title belt last weekend but it was the first time the American has been stopped in his 44-fight career.

However, Wilder blamed his assistant trainer for throwing in the towel in last week’s rematch.

He also blamed the heavy costume he wore for the ring walk and has decided to take up the 30-day clause to stage another rematch.

In his video calling out Fury on Saturday, Wilder said: “‘Hello my people, my Bomb Squad army, my Bomb Squad nation, to all my loved ones around the world, I just want to let you know I am here.

“Your king is here. And we ain’t going nowhere, for the war has just begun. I will rise again. I am strong. I am a king, you can’t take my pride.

“We will regain the title.

“I will be back. We will hold our heads up high. Your king is in great spirit.

“We will rise like a phoenix from the ashes and regain the title. I’ll see you in a few months, for the war has just begun. All my love to all my people.”

Promoter Bob Arum has already indicated the clash will take place in Las Vegas in July.

But Fury’s promoter could still put off that third fight until after his man takes on Anthony Joshua in a battle of Britain.

( In My Shaka Zulu Voice) #Prepare For War #BombZquad