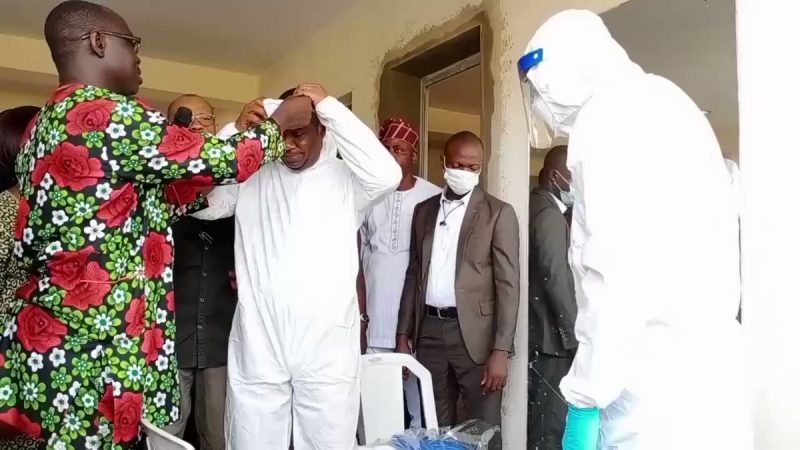 Governor Sanwo-Olu, rights, waits as deputy Hamzat is kitted with coronavirus protective kit, during a visit to Mainland Hospital

The Lagos State Government has been in touch with around 100 people who may have been exposed to an Italian man who is the country’s first coronavirus patient, the health commissioner, Professor Akin Abayomi said on Sunday.

Abayomi gave the figure to Reuters in a telephone interview.

“It is around 100 people but that number is increasing every minute,” he said.

Lafarge Africa Cement factory in Ewekoro, Ogun State which the Italian visited has already identified 39 people who made contacts with him. They have all been quarantined.

The company also revealed that the Italian slept at Ikeja Airport Hotel in Lagos, before visiting the factory in the neighbouring state.

The Italian is now being treated at the Mainland Hospital in Yaba.

He works as a vendor for Lafarge.

The company issued a statement on Sunday in which it said its cement production lines remained open.

The case, which is the first in sub-Saharan Africa, has prompted fears the virus could spread quickly.