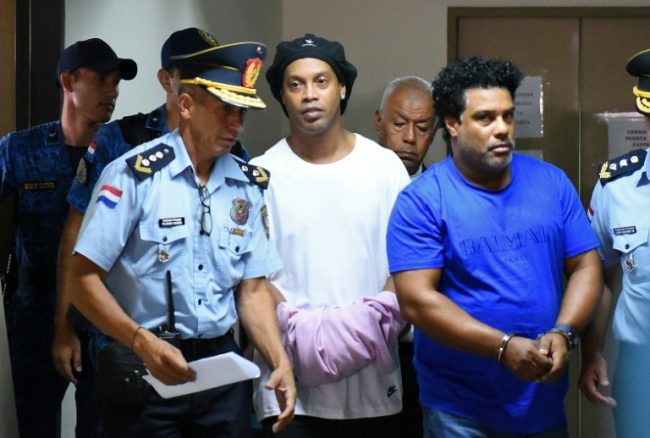 Ronaldinho(in white) covers his handcuff with a pink dress, with his brother Roberto on Saturday in Asuncion Paraguay

A Paraguayan judge ordered Brazilian football legend Ronaldinho detained behind bars on Saturday after being arrested and handcuffed for entering Paraguay on a fake passport.

The two-time world player of the year and his brother Roberto, who was detained with him, had spent the night in the headquarters of the Specialized Police Group in the capital city.

The pair appeared Saturday morning before Judge Clara Ruiz Diaz at the Palace of Justice.

Prosecutor Osmar Legal said Ronaldinho — his full name is Ronaldo de Assis Moreira — and his brother were being charged with using false official documents, and he requested that they be held in preventive detention.

The judge agreed. “They committed a serious act that threatens the state,” she said, and ordered them held.

A lawyer for the brothers, Tarek Tuma, called the judge’s decision “irrational (and) arbitrary” and demanded that the judge recuse herself.

Ronaldinho was the star of Brazil’s 2002 world championship team; he played professionally for teams including Paris Saint-Germain, AC Milan and Barcelona, and was considered one of the greatest players of all time.

He spent Friday night in an administrative office in police headquarters that had been converted to serve as a cell, said Commissioner Blas Vera.

Ronaldinho, winner of the prestigious Ballon d’Or prize in 2005, was allowed visitors — one brought him blankets and bedding — and was even permitted to order a late dinner from a fast-food chain.

The incident began on Wednesday when the brothers arrived at the Asuncion international airport, coming from Brazil, and showed their passports to immigration police, who did not immediately spot the problem.

But hours later, when the passports were determined to be fake, investigators raided the room Ronaldinho was staying in and seized the brothers’ identity cards and passports.

Ronaldinho said the documents had been given him by people who had invited him to attend conferences sponsored by charities working with disadvantaged children.

The soccer legend was also scheduled to open a casino belonging to a Brazilian businessman.

Brazilian authorities revoked Ronaldinho’s passport in late 2018 after he failed to pay a $2.5 million fine for building a pier in a protected lake, Brazilian media reported.

A representative of Ronaldinho, Wilmondes Sousa Lira, who is Brazilian, was charged with producing and using false documents as well as criminal association and was ordered held in the Tacumbu prison.

Prosecutors said they had provided the fake documents to the Brazilians. They were placed under house arrest.