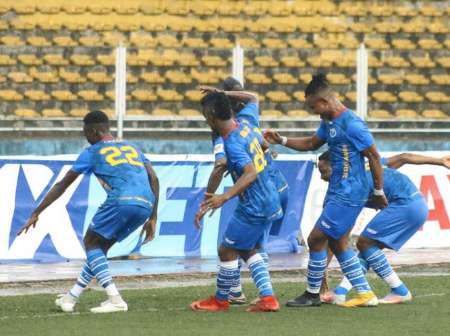 Warri Wolves Football Club on Sunday beat the MFM FC of Lagos 2-0 at the Warri City Stadium in a Match Day 24 fixture of the 2019/2020 Nigeria Professional Football League (NPFL).

Substitute Okoyoh Michael put the hosts ahead in the 89th minute, while Charles Atshemene scored the second goal in the first minute of added time.

A combination between Goodluck Onamado and Abu Azeez almost earned Warri Wolves the first goal in the 8th minute but the final effort was deflected by the MFM FC goalkeeper.

At the resumption of the second half, both sides changed their tactical approach to the game.

Bala Akintunde of MFM FC was issued a red card for unprofessional misconduct in the 52nd minute and that changed the game plan for the visitors.

While Warri Wolves made three substitutions, MFM FC made two in the second half.

At the post-match interview, the coach of Warri Wolves, Evans Ogenyi, commended the performance of his players.

“Our opponents came with dull defensive tactics. When we played against them in the first stanza, we ran away with a win.

“I know they will now come with anger and I told my boys to expect a difficult match.

“We created about four chances in the first half, but they were wasted because of anxiety.

“In the dressing room, we said there was the need to up our game, be patient and take our chances, especially in the attack.

“On the whole, my boys did not play to their full potential today.

“But the important thing is that we got the three maximum points because we took the two chances that came our way,” he said.

The coach said he would now approach their mid-week match against Rivers United with every seriousness.

One of the day’s scorers, Michael said he dedicated the goal to the late Chineme Martins who slumped and died on the pitch on March 8.