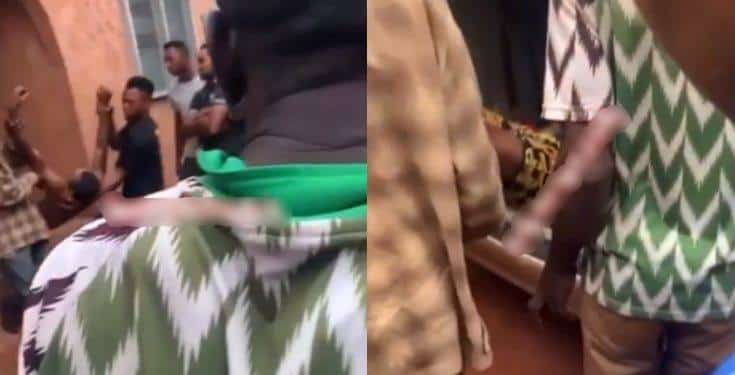 Ekpoma suicide:Combo photo from viral video shows the man being taken away

Some residents of the University town of Ekpoma, in Edo state were grief-stricken on Saturday when the body of a butcher was taken out of a bungalow.

Identified as Peter Uche, the man was said to have committed suicide in his room.

His body was found dangling through the window of his room.

The video of the incident published by instablog9ja, has gone viral.

When contacted on phone, Edo Police Command spokesman, ASP Chidi Nwabuzor, could not confirm the report.

He said the command was yet to be briefed.

“I am not yet aware of the incident. I’ve not been briefed. Once I am briefed, I’ll get back to you,” Nwabuzor said.

Instablog9ja claimed Uche hanged himself with a towel in his room in the early hours of today.

“He was found dangling through his room’s window and was subsequently rushed to the hospital where he was confirmed dead. The reason behind his action remains unknown,” it said.