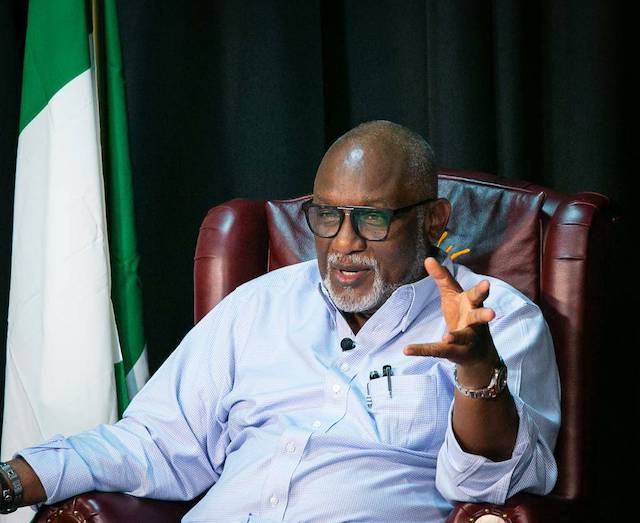 It appears the plan to unseat Governor Rotimi Akeredolu of Ondo State has run into some bad weather.

His opponents within the APC family, under the umbrella Unity Forum, are fighting over
the emergence of Chief Olusola Oke as its consensus candidate.

He is expected to compete with Akeredolu in the primary.

Oke was unveiled by Alhaji Ali Olanusi, who has vowed to unseat Akeredolu.

But no sooner Olanusi nominated Oke than other members of the Unity Forum shouted disagreement.

Those that opposed the emergence of Oke were Secretary of the forum Dapo Adelegan, Prof. Sola Ehindero and Deputy Senate Leader Robert Ajayi Borofice.

Senator Borofice, the patron of the forum, rejected the emergence of Oke and urged aspirants to prepare for the primaries.

“Firstly, the political tendencies in Unity Forum could not agree on critical processes that could have led to the adoption of a consensus candidate. For instance, while some members opted for zoning, some disagreed. Recently, aspirants participated in a zoning process and the majority agreed that Ondo North Senatorial District should produce the consensus candidate.

”Secondly, when the idea of consensus candidacy was mooted, the understanding was that all seven members of the Governorship Candidate Selection Committee must unanimously agree on a consensus candidate. The condition has not been met.

“Therefore, it is the opinion of the majority of leaders and members of Unity Forum in Ondo North Senatorial District and other parts of Ondo State that Unity Forum is yet to present a consensus candidate.”

Prof. Ehindero described the announcement of Oke as the consensus candidate as fake news.

Akeredolu has declared intention to seek a second term.

He said he would not reconcile with members of the forum or any other aggrieved group in the Ondo APC.

*Read the original in The Nation