National Theatre to be revamped in 22 months: Lai Mohammed 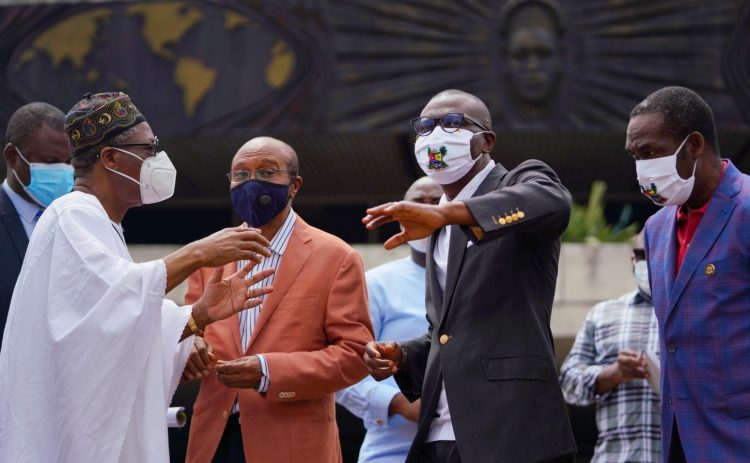 L-R: Minister of Information and Culture, Alhaji Lai Mohammed; Governor of Central Bank of Nigeria (CBN), Mr. Godwin Emefiele; Lagos State Governor, Mr. Babajide Sanwo-Olu and his Deputy, Dr. Obafemi Hamzat, during the official handover of the National Theatre facilities to the CBN and Bankers Committee for revamping and development on Sunday, July 12, 2020.

The Minister of Information and Culture, Alhaji Lai Mohammed said the National Art Theatre in Lagos will be revamped with creative hubs of four clusters – film, music, fashion and IT- in 22 months.

The Minister gave the assurance on Tuesday on NTA live Programme, “Good Morning Nigeria” monitored by the News Agency of Nigeria (NAN) in Abuja.

Mohammed said that as part of the efforts to reposition the creative industry, the Federal Government recently handed over the National Theatre to the Central Bank of Nigeria (CBN) to renovate.

He said the CBN and its partner, the Bankers Committee would commit about N25 billion on the project out of which N7 billion would be used to renovate the National Theatre edifice and put it back to its glory days.

He said N18 billion would be committed to building the creative hubs and other infrastructure on the 142 hectares of land lying fallow around the edifice.

Mohammed clarified that the ministry was not giving out the National Theatre edifice to the CBN, it would be returned to government after the renovation.

“We are not giving them the National Theatre, they are returning the edifice to us – the main bowl, the cinema halls, the banquet hall the restaurants, the bar -.

“They will revamp the facilities and hand over to us a brand new National Theatre.

“ For more than 40 years every attempt to renovate the National Theatre has failed; so when we saw the opportunity of public-private partnership where the CBN and Bankers Committee intervened we went for it.

“In return for revamping the National Theatre, we gave them the fallow land around the edifice where they will develop.

“The 142 hectares of fallow land around the edifice will be converted to creative hubs of four clusters in the film, music, fashion and IT sectors.

“The space will be curated for soft and hard landscape spaces, artificial lake will be created and the entire environment will be transformed,” he said.

The minister said the essence of the partnership is to create job opportunities for the youths in the creative sector and the project will be realised in 22 months.

The National Arts Theatre is a monument located in Iganmu, Surulere, Lagos as a primary centre for the performing arts in the country.

Its construction was begun by the military regime of Gen. Yakubu Gowan and was completed in 1976 by Gen. Olusegun Obasajo in preparation for the Festival of Arts and Culture (FESTAC) in 1977.

The edifice has a 5,000-seater Main Hall with a collapsible stage, and two capacity cinema halls, all of which were equipped with facilities for simultaneous translation of eight languages; among others.