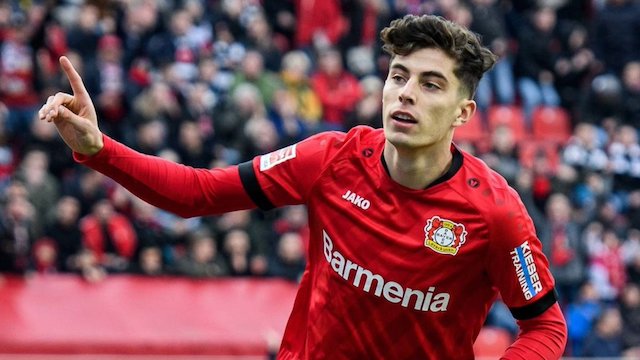 CLAIM: Speculations continue to heighten with claims that an agreement has been agreed over Chelsea’s Kai Havertz signing

The 21-year-old German popped into the radar of Chelsea who are in the middle of completely overhauling their team after an indifferent season.

Though Chelsea made a top-four finish in the Premier League and qualified for Champions League next season, they suffered painful final losses to Arsenal in the FA Cup and Bayern Munich in the UEFA champions league knockout stages.

Rumours continue to mount that Havertz is close to joining the London team. In the early hours of Tuesday, there were reports Chelsea published on their website that Kai Havertz transfer was already agreed and deleted shortly after.

@ChelseaFC want to explain why this was shortly deleted?? @kaihavertz29 to Chelsea ✅ pic.twitter.com/UsNUguCHt6

Speculations continued on popular social media Twitter that an agreement between Bayern Leverkusen and Chelsea has been reached over Havertz signing for £70M plus adds on.

Total agreement between Bayer Leverkusen and Chelsea over the transfer of Kai Havertz. Deal is expected to be £70m plus add ons. Kai will fly to London in the next few days for his medical. Here we go #CFC #Transfers

Others have it that Chelsea would be having double medicals this week for Ben Chilwell and Kai Havertz as both players would report to training on Friday.

Chelsea are planning to have Double Medicals this week Ben Chilwell and Kai havertz £70M, The Boy's will report to Training this Friday. Come on blues get this done.
#chelsea pic.twitter.com/EM50jWEtvG

VERIFICATION: Checks by P.M. News on Chelsea FC official website show that there are no news or mention of any sort about Kai Havertz on the website. Checks on other top media outlets also show that discussion about Kai Havertz transfer is still ongoing according to Mirror and football London who claims Chelsea has been told they will not budge from their £90m valuation of Kai Havertz.

That being said, the state of Havertz transfer to Chelsea currently cannot be explained, however, sky sports reporter Kaveh Solhekol, in a report explained that Bayer Leverkusen are refusing to give Chelsea a “corona discount” on Kai Havertz and are sticking to their €100m (£90m) asking price.

Despite the 21-year -old interest in joining the West London team, an agreement between him and Bayern Leverkusen can only allow him to leave the German team when their valuation is met.

Conclusion: Speculations that Havertz has joined Chelsea or an agreement between Bayern Leverkusen and Chelsea has been reached is MISLEADING as both teams are yet to agree on terms to sign the midfielder.