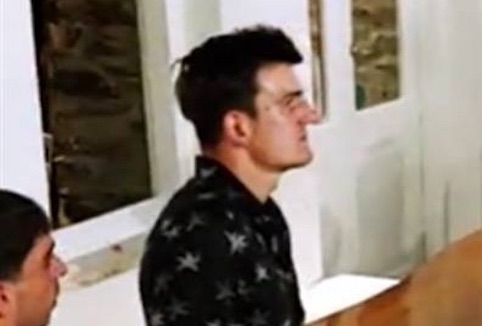 Manchester United captain Harry Maguire and two other unidentified persons arrested in the Greek Island of Mykonos for assaulting policemen, will face the state prosecutor today.

Maguire, 27, spent the night in a cell along with two other men thought to be fellow players aged 28 and 29.

The trio will face the state prosecutor in the island of Syros.

They will spend a second night in a Greek cell after being arrested for allegedly attacking police officers after a raucous night out.

The £85million England international was allegedly involved in a bust-up with a group of other Englishmen before becoming ‘very abusive and aggressive’ towards officers who arrived to intervene.

One of the three men was transferred to Syros on Friday while wearing a mask and dark sunglasses while hiding his face from the camera, the Daily Mail reported.

The men have been charged with aggravated assault. Two of the officers suffered facial injuries during the scrap after they were allegedly hurled to the ground, punched and kicked.

Footage taken by local TV station Mykonos Live today shows one of the men getting out of a police car and pulling his t-shirt over his face ahead of his transfer to the nearby island.

It is not clear if anybody at this party was with Maguire later that evening.

Police today said that two groups of Englishmen were brawling outside Mykonos’ Fabrica bar in the early hours of Friday morning and when they tried to intervene they were rounded on by three men, including the centre-half.

‘When the brawl was all sorted out, one of the two groups – with the football players – started verbally abusing officers. There were several policemen there.

At some point, one of the three members of the group – they were aged 27, 28, and 29 – threw a swing at one of the policemen and a fight ensued.’ Petros Vassilakis a police spokesman said.

‘All of the three were arrested but during the effort to do so, the other two, including the football player, got violent also. They threw down at least two policemen, hit them with their fists and kicked them.