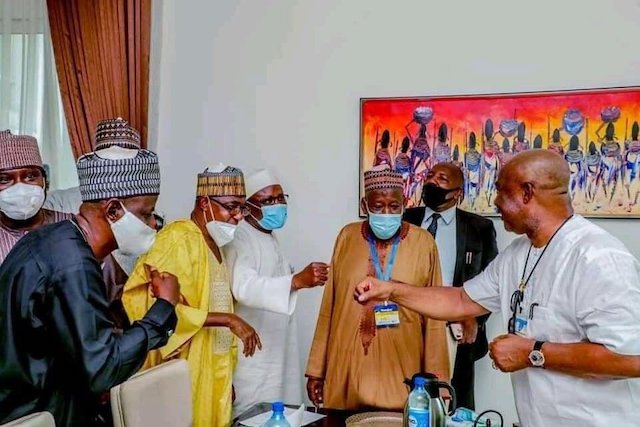 APC leaders, including Governors Ganduje and Uzodinma arrive Benin for the election

Salihu Yakasai, the media aide to Kano State Governor, Abdullahi Ganduje, has admitted that the People’s Democratic Party and its candidate Godwin Obaseki have won the Edo governorship election.

Obaseki is currently leading with over 80,000 votes in the official results posted by the Independent National Electoral Commission (INEC).

However, Yakasai, in a Twitter post, said the defeat provides “important lessons” to APC as a party.

He also warned the ruling party to do “some soul searching for our survival”.

“The outcome of #EdoElection has some important lessons for APC as a party, not just in Edo but equally at the centre.

“But most importantly, the outcome has some insights into the future of the party as well. Let’s look inwards and outwards and do some soul searching for our survival,” Yakasai wrote.

Governor Ganduje is the chairman of the All Progressives Congress campaign committee for the Edo governorship election – the same position occupied by Governor Wike for the People’s Democratic Party.

However, prior to the election, Abdullahi Ganduje, governor of Kano state, vowed to send Nyesom Wike, his Rivers counterpart to an isolation centre.

“We know PDP made Wike their chairman but I assure you, we will isolate Wike in an isolation centre and before he recovers, the election is over. The PDP decided to accommodate our former Governor in Edo State not because they have anything in common, not because they share some feelings, but simply because he is managing the treasury of Edo State and they want him to use that treasury in order to win the election.” Ganduje had said.