#EndSARS: How Jimoh Isiaq was killed 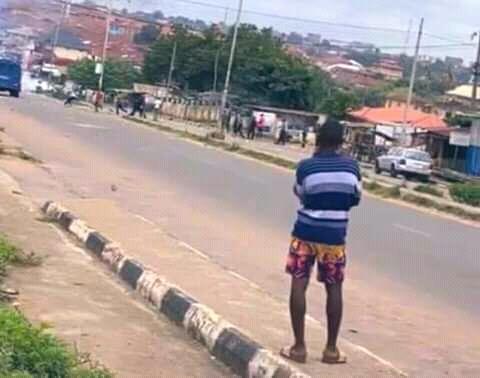 Jimoh Isiaq, a student of Ladoke Akintola University Ogbomoso, was shot dead by the police today during an #EndSARS protest in Ogbomoso, Oyo State.

Isiaq, a resident of Ogiri Compound Ita Alasa, Ogbomoso, was killed when a police team monitoring the protest opened fire at demonstrators who had gathered to lent their voices to the ongoing EndSARS protest rocking the nation.

According to eyewitnesses, the police officers used live bullets to disperse the crowd and in the process, Isiaq was hit.

The victim was then rushed to the Ladoke Akintola Teaching Hospital Ogbomoso where doctors battled to save his life but couldn’t. The bullet had pierced his rib.

What makes Isiaq’s death intriguing is that he was not part of the protesters, as he was only an onlooker.

Meanwhile, the police denied the killing, saying that they did not open fire at the protesters.

The Commissioner of Police in Oyo State, Nwachukwu Enwonwu, via a statement signed by the command’s spokesperson Fadeyi Gbenga, said the police did not fire a shot or kill any protester.

The statement reads: “The CP wishes to state that the Police allowed the protesters to express their feelings during the protest and they were not hindered in any form until when they started throwing stones into the Police premises and attempted to gain entrance into the premises.”

However, the statement by the CP was knocked out by the Chief Security Officer and Governor of Oyo State Seyi Makinde.

The governor confirmed that the young man was shot during the peaceful protest.

Makinde stated that the constitution backs Nigerians protesting against the brutality of the Anti-Robbery Squad, SARS, and an attempt to rob the youth of their rights will not be supported by him.

“I have received with deep sadness the news of the passing of one of our children, Jimoh Isiaka, who was shot during the End SARS protest in Ogbomoso.

“Also, at this same protest, Abdulrasaq Olawale, Oluwadamilare Gbolohunmi, and five other persons sustained injuries and were taken to hospital for treatment.

“The End SARS protests are a strong indicator of systemic failure. It is a failure on the part of those who have been constitutionally empowered to protect the citizens.

“It again calls into question why State Governors are called Chief Security Officers of their state whereas, they do not have the necessary powers to control the police force.

“Peaceful protests are a big part of our democratic process. The right to freedom of speech and assembly are guaranteed by our Constitution, and I will never support any attempt to rob citizens of their fundamental human rights,” Governor Makinde stated.

However, Isiaq’s killing has further increased agitations for the scrapping of the Special Anti Robbery Squad, as Nigerians have taken to social media to say this latest death justifies their agitations and is the more reason why SARS should be scrapped.