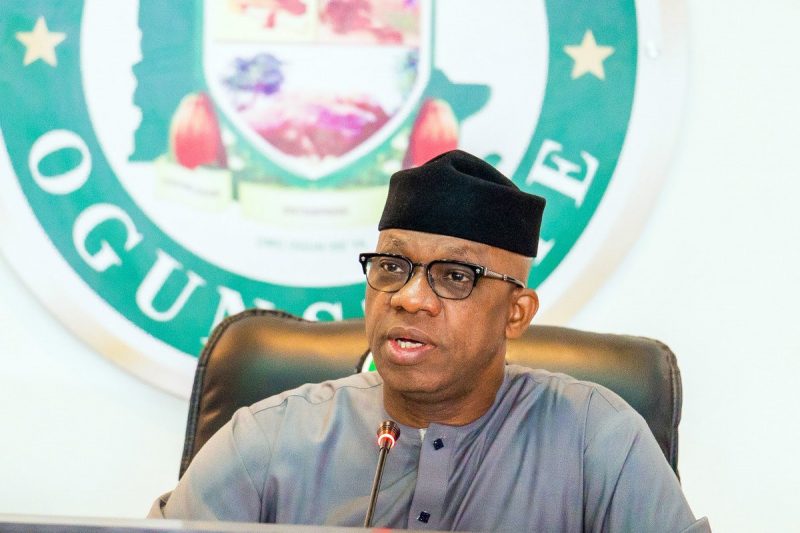 He also canvassed for joint efforts towards addressing the issues.

The Governor said this while speaking at an event to mark this year’s World Food Day, held at the Arcade Ground, Oke-Mosan, Abeokuta.

He observed that it was imperative to increase food production to achieve global food security and reduce incidences of hunger and malnutrition around the world.

“It is important to note that eradicating hunger and malnutrition is one of the greatest challenges of our time. Little wonder that even the United Nations recognizes the need to fight hunger and unhealthy diets as part of the global Plan 2030 as indicated in Goal 1 (poverty) and goal 2 (Zero Hunger) of the Sustainable development Goals.

“This shows the importance of fighting hunger as the stimulus for socio-economic development. It goes without saying that ‘one cannot think well, love well and sleep well if one has not dined well’, he noted.

Quoting from the Food and Agricultural Organization report, Prince Abiodun said over 850 million people are suffering from chronic undernourishment out of which 60 per cent are women, while one in nine persons, experience chronic hunger and almost five million children under the age of five die of malnutrition-related causes globally every day.

“Today is a day of action, dedicated to the tackling of global hunger and a day to draw attention to the plight of the hungry and malnourished people across all races, creeds and continents”, he said.

The Governor while describing the theme of this year’s celebration “Grow, Nourish, Sustain Together” as appropriate to the country’s peculiar circumstances, however, lamented that though food was essential to life and the bedrock of the society, many still go without it or could hardly afford to have it, even once in a day, adding that preserving access to safe and nutritious food would continue to be an essential part of his administration’s response to the COVID-19 pandemic, particularly for the poor and vulnerable, who are hit hardest.

Governor Abiodun maintained that agriculture was the major pillar of the present administration, saying many programmes including the flag-off of the Central Bank of Nigeria’s Anchor Borrowers’ Programme, the launching of FADAMA Graduate Unemployment Youth Scheme, facilitation of CBN’s credit facilities to over 10,000 farmers across the State, were some of the steps taken to enhance the fortune of farmers and encourage other people to return to the farms.

Ogun State, the Governor said, was the largest producer of poultry in the country, as it has graduated 54 participants who took part in the Ogun State Broilers Project, while a Joint Ogun International Fund for Agriculture Development (IFAD) Value Chain Project was ongoing across the State.

He enjoined individuals, organizations, Civil Societies and all stakeholders to ensure that food systems grow varieties of food to nourish and sustain the people, adding that doors are wide open for both local and foreign investors willing to invest in the State, particularly in agricultural production and processing.

Speaking earlier, the State Commissioner for Agriculture, Dr.Adeola Odedina while stressing the importance of land to agribusiness, disclosed that government has ordered the review and reform of the process of land access to ease doing Agric-Business in the State.

He said despite numerous challenges, the State government was able to confront the challenges of using agriculture as an opportunity to provide food, jobs industrialisation, generate foreign exchange earning and ensure the well-being of the people.