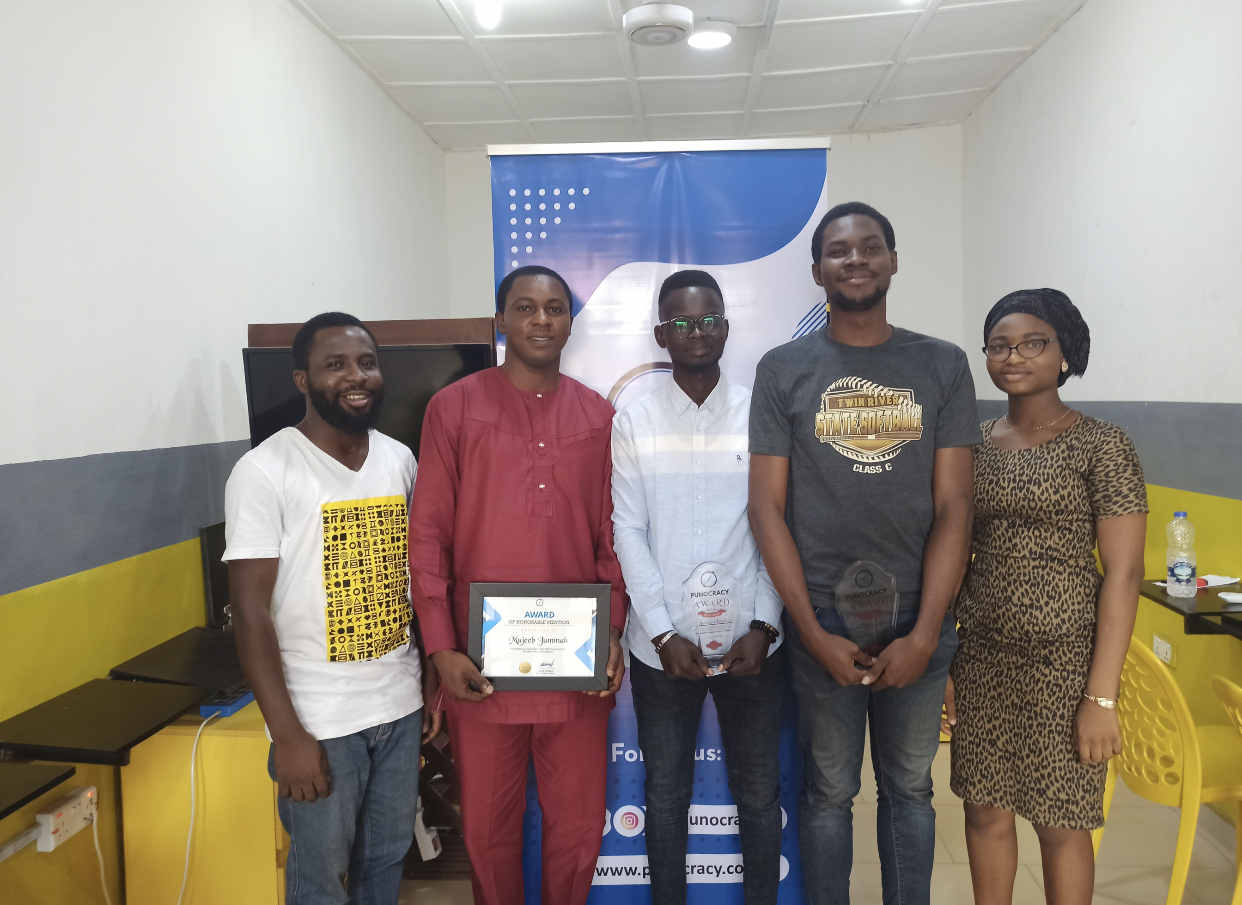 This event took place in Ibadan on Monday.

The art group simultaneously celebrated the ‘World Day of Satire,’ through a webinar themed The Relevance of Satire in Today’s World.

The maiden edition of the award event was held last year when the World Satire Day, November 9, was declared by the group.

Punocracy first ran as a regular satirical column styled after Andy Borowitz’s ‘The Borowitz Report’ of The New Yorker at the University of Ibadan by a student under the pseudonym, Tubosun Ajanaku.

The platform had earlier announced the winners of the prize, which was judged by Elnathan John, a Germany-based Nigerian author of satirical blockbuster, Be(com)ing Nigerian; and Chuma Nwokolo, a lawyer, publisher and author who wrote, among others, The Ghost of Sani Abacha.

The trio of Oluwatimilehin Odueso, Favour Olajide, and Solomon Nzere emerged as top entrants in this year’s prize for satire competition organised by Punocracy.

Mr Odueso’s How to raise a true believer was adjudged the overall best entry by the judges, followed by Mr Olajide’s The Next Nigerian Leader: A reality TV show, and Mr Nzere’s The Gospelpreneur — Letter to David.

With support from Goethe Institut, the three winners were respectively awarded cash prizes of N70,000, N50,000, and N30,000, and Light Multifarious Bookstore complemented the awards with book prizes. Candidates in the honourable mentions, Jummah Mujeeb and Fatimah Otukoya, each got a cash prize of N10,000 and certificate for their entries in the newly introduced visual art category.

Commenting on the entries, Mr John commended the entrants for their grasp of the use of wit, sarcasm, exaggeration and irony, which are key elements of satire, in telling their stories.

“Good satire not only ridicules our political failures or cultural foibles,” he said, “it is also a call to action. For satire to be this call to action, it must avoid things which may distract from this engagement.

“Satire can be subtle or brutal, and can use various styles, but it always has a serious concern. It cannot be flippant. Like a person wielding a weapon, every stroke must be deliberate or one risks harming the wrong person or harming oneself.”

Mr Nwokolo also noted that satire must reflect a distaste for certain societal norm, but first, its delivery must be one to make the public think.

Panellists at the webinar held on Monday included Victor Daniel, lawyer and features writer at Nigeria Abroad; and Andrew Unger, author of satirical novel Once Removed and founder of Canadian satire website, The Daily Bonnet.

While delivering the welcome address, the group’s lead, ‘Kunle Adebajo, harped on the need for satire in the contemporary Nigerian society and the world.

He noted that the World Day of Satire and by extension the group’s goal was to make satire a widely accepted and understood tool for driving social change, correcting ills, and reducing political apathy, especially among the youth.

Mr Unger said humour can either be innate or learnt.

He added that either way, “it requires knowledge and literacy. It requires people to be taught to understand. It is different from slapstick.”

On the distinction between satire and false news, he explained that the intents behind both are not the same.

“Satirical news are never intended to trick people, but to get people thinking, talking and laughing. Not only are you making a point, you are also making people laugh.”

On his part, Mr Daniel said it was crucial to mainstream satire in order to drive a far-reaching awareness of the genre among the Nigerian public.

He said this was important for the public to wield the power to see the rot in the society and demand for sweeping reforms. This, he added, can only be achieved when the mainstream media helps raise awareness about the genre.

“Satire needs to go mainstream (in Nigeria). In America, people use comedy to expose the complexities in the society, from TV shows to entertainment. This will happen when media organisations are willing to give room for satire to thrive. We need more satirists to use social commentaries for the good of all.”

“Writers of satire in Nigeria are one of the best around the world, but bigger platforms need to elevate the genre,” he noted. “By this, it will trigger political consciousness in the average Nigerian.”