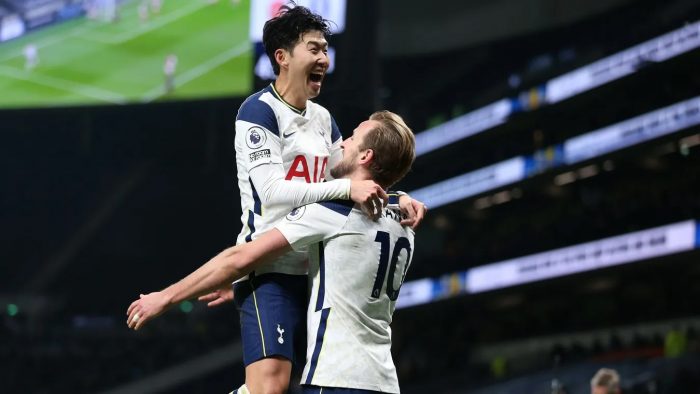 Kane and Son celebrating after a goal.

Tottenham striker, Harry Kane, who scored the last goal in their match against London rivals Arsenal boasted that it is exactly what they set out for. Kane said they played well in the first half and also in the second half.

“That’s exactly what we set out for. We played well in the first half, and the second half was a grind, so we’re happy they didn’t create too many chances, he said in his post-match interview.

Arsenal’s woeful form in the English Premier League continued as they lost 2-0 in their 11th match.

The Gunners have only won one match in the Premier League since October. Their fall in the game began when Thomas Partey was forced off due to an injury during the first half.

Son Heung-min and Harry Kane’s goal compounded their woes as they scored in the 13th and 45th minute respectively.

The gunners now sit 15th on the Premier League table and could slip further to 16th if Brighton win their league game against Southampton on Monday.

Jose Mourinho, Tottenham’s coach after the match described it as a good win for his team. He said the clean sheet means that the team is well organized and the players have can play together in solidarity.

“It was a complete performance. 50% is organization. 50% is desire, commitment, solidarity,” Mourinho stated.