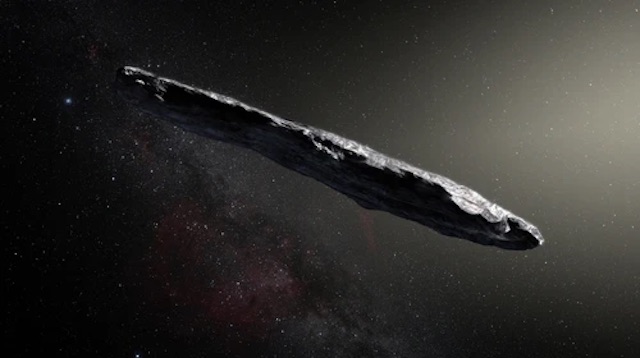 Oumuamua a natural object or from aliens in outer space?

Harvard Professor of astronomy Avi Loeb said extra-terrestrial aliens tried to contact human beings on Earth in 2017, when an asteroid-like object, Oumuamua, whizzed away in space.

Loeb made the claim in a 240-page book that will be released on 26 January.

A peep into the book titled “Extraterrestrial: The First Sign of Intelligent Life Beyond Earth”, was published by Samir Ferdowsi in Medium.

While other alien watchers and scientists who have studied the object, said it was a natural phenomenon, Loeb insists the giant object was alien in origin.

He said the object, which measured approximately half a mile in length and was moving at an irregular pace, was an intergalactic attempt to contact Earth.

“The most exciting aspect of the possibility that ‘Oumuamua is weird and unlike any asteroid or comet that we had seen before is that it might be a product of an alien technology,” Loeb told Motherboard in an email.

“If so, we might not be the ‘sharpest cookie in the jar’ or ‘the smartest kid on the block.’ We should search for additional interstellar objects to find out.”

In 2019, researchers at the University of Maryland published a paper in Nature Astronomy concluding that the giant space blunt was bizarre, because of its colour, the fact it didn’t have comet-like propulsion, and the fact that it didn’t give off gases in the way a comet would be expected to.

But they also said it was unlikely to be alien in nature: “‘Oumuamua’s having some unusual properties is by no means sufficient evidence to conclude that it must be aliens,” Matthew Knight, co-author of that paper, told Motherboard at the time.

“As a scientist, I’m trained to not think in absolutes, so I can’t say with 100% confidence that it *wasn’t* aliens.” Knight hypothesized that the object was “planetesimal,” meaning it could be a building block of a planet.

Loeb on the other hand said he doesn’t want to jump to conclusions and fill loopholes with assumptions.

He argues in his book that this type of thinking is ignorant and we should consider all possibilities, especially because, as he says, humans aren’t the smartest ones out there.

“Most of the mainstream astronomy community continued with ‘business as usual’ and ignored ‘Oumuamua’s anomalies,” Loeb said.

“Some mainstream astronomers tried to explain the anomalies but needed to invoke objects that were never seen before, like a hydrogen iceberg or a ‘dust bunny,’ that are not likely to survive the long interstellar journey.”

Exactly what the object is unknown, but the professor is certain it’s an object from a distant alien civilisation.

NASA can confirm it came from another solar system, accelerated in a non-comet-like way through space, and that “astronomers had never seen a natural object with such extreme proportions in the solar system before.”

“My point is that it is very difficult to explain the weird properties of `Oumuamua with conventional natural processes, so studying objects of its type in the future will either educate us about an unusual natural source or about another civilization,” Loeb said.

“Let’s collect evidence and not rely on prejudice.”