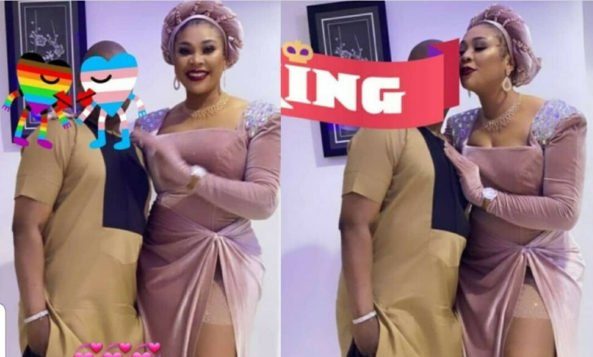 Ehi Ogbebor, an interior decorator and ex-wife of billionaire Ken Braimor, has confirmed the reports of her relationship with Musiliu ‘MC Oluomo’ Akinsanya, Lagos chairman of the National Union of Road Transport Workers (NURTW).

Ehi took to her Instastory to show off their moment of “good time” at the 50th coronation anniversary of the Oluwo of Iwo land on Saturday, January 16.

Included in Ogbebor’s photo of Oluomo was an inscription that read “king” alongside a love emoji below his torso.

Ogbebor also shared footage of her spraying naira notes on MC Oluomo as he danced at the event.

As word of her relationship spread, Ogbebor, who sits atop a multi-million business empire known as Sayaveth Decor and Hotel, dismissed claims that her lover bankrolled her business.

“I’m beating my chest to say it. No man spent one dime on my house. If you did and you’re a man and you don’t speak up, God will punish you. I’m betting a $100,000. Come out if you claim to have bankrolled me,” Ogbebor stated in a video released on her social media page.

“Or you spent one Naira in my business or building my house. I built my house myself. I’m on the road at times, four days a week. I do it for myself and my kids. Stop ruing the minds of these little girls.

“You’re making them think they have to be with men for money. Beyonce is with Jay-z. Is he bankrolling her? What are you teaching girls? I will be with a man I care about. He doesn’t need to give me a dime because I don’t need it!