Amanda Gorman: The story of the poet who stole the show at Biden’s inauguration 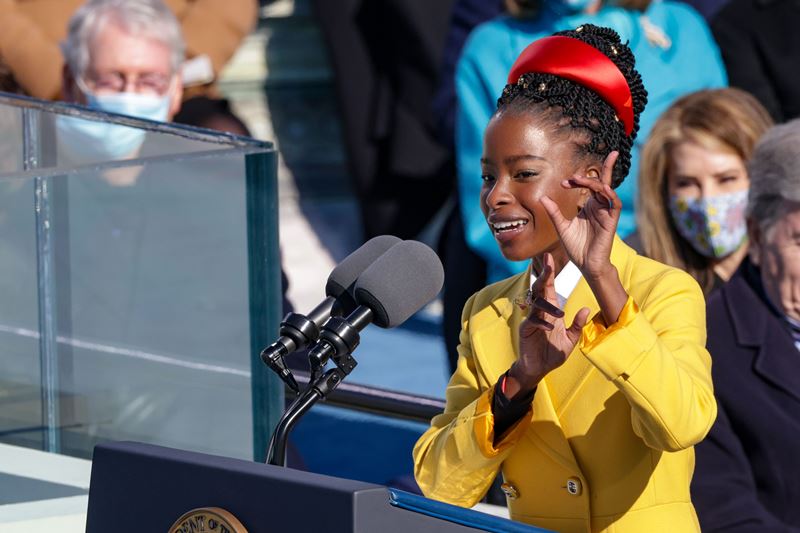 Amanda: stole the show at Biden's inauguration with her poem

She represents all that America stands for. A young black skinny girl, she had always dreamt of becoming the President of the United States only to find herself reciting her poem for one at 22.

This, succinctly put, is the story of Amanda Gorman who made history on Wednesday 20 January by being the youngest poet ever to recite a poem at a presidential inauguration in the United States. And she did it so well, becoming the star of the moment.

An intriguing thing about Gorman is that she had a speech impediment as a child – an affliction she shares with America’s new president.

Still, the remarkable thing about Gorman’s performance is that she performed her poem, The Hill We Climb, to the admiration of dignitaries present and a watching global audience, calling for unity and togetherness in the United States. Her five-minute poem began:

“When day comes, we ask ourselves:

Where can we find light

In this never-ending shade?

The loss we carry, a sea we must wade.

She went on to reference the storming of the Capitol earlier this month.

“We’ve seen a force that would shatter our nation rather than share it, would destroy our country if it meant delaying democracy,” she averred.

“And this effort very nearly succeeded. But while democracy can be periodically delayed, it can never be permanently defeated.”

Gorman delivered her piece which was inspired by the storming at Capitol Hill, with confidence and astonishing grace. A beautifully paced, well-judged poem for a special occasion, it will live long beyond the time and space of the moment.

As a result of her sterling performance, the writer and performer, who became the country’s first National Youth Poet Laureate in 2017, followed in the footsteps of such famous names as Robert Frost, Maya Angelou, Miller Williams, Elizabeth Alexander and Richard Blanco.

Yet none of her predecessors faced the challenge that Gorman did. She set out to write a poem that would inspire hope and foster a sense of collective purpose, at a moment when Americans are reeling from a deadly pandemic, political violence and partisan division.

“I really wanted to use my words to be a point of unity and collaboration and togetherness,” Gorman was quoted as saying before the ceremony.

“I think it’s about a new chapter in the United States, about the future, and doing that through the elegance and beauty of words.”

“In my poem, I’m not going to in any way gloss over what we’ve seen over the past few weeks and, dare I say, the past few years. But what I really aspire to do in the poem is to be able to use my words to envision a way in which our country can still come together and can still heal,” she said. “It’s doing that in a way that is not erasing or neglecting the harsh truths I think America needs to reconcile with.”

Asked how she felt when  she found out she had been chosen to read at Biden’s swearing-in ceremony Gorman said she “screamed and danced her head off.” She also said she felt “excitement, joy, honour and humility” when she was asked to take part, “and also at the same time terror”.

Meanwhile world leaders, including Michelle Obama, Hillary Clinton have taken to social media to praise the poet who described herself in the poem as “a skinny Black girl, descended from slaves and raised by a single mother,” who can dream of being president one day, “only to find herself reciting for one.”

Michelle Obama took to Twitter to applaud her, writing, “With her strong and poignant words, [Gorman] reminds us of the power we each hold in upholding our democracy. Keep shining, Amanda! I can’t wait to see what you do next. 💕 #BlackGirlMagic”

Hillary Clinton tweeted that Gorman had promised to run for president in 2036 and added: “I for one can’t wait.”

“I have never been prouder to see another young woman rise! Brava Brava, @TheAmandaGorman! Maya Angelou is cheering—and so am I,” Oprah Winfrey tweeted.

Illinois poet laureate Angela Jackson said the recitation was “so rich and just so filled with truth”.

“I was stunned that she was so young and so wise,” Jackson told the Chicago Sun-Times.

Singer Sheryl Crow tweeted: “If the future looks like inaugural poet laureate Amanda Gorman, we are in good shape. Wise and inspiring.”

Gorman fell in love with poetry at a young age and distinguished herself quickly as a rising talent. Raised in Los Angeles, where her mother teaches middle school, she would write in journals at the playground. At 16, she was named the Youth Poet Laureate of Los Angeles. A few years later, when she was studying sociology at Harvard, she became the National Youth Poet Laureate, the first person to hold the position.