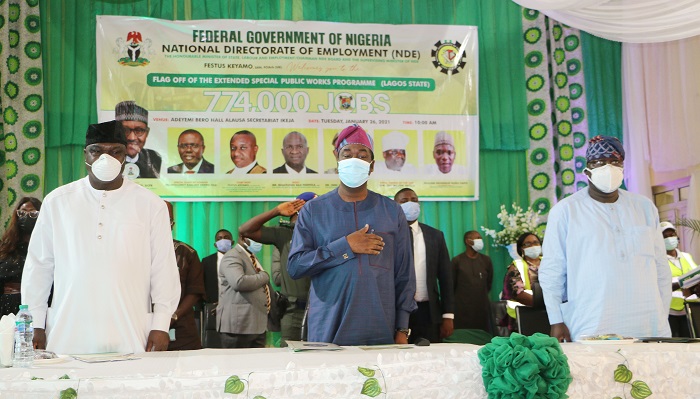 After a protracted discussion among the stakeholders, the Federal Government today in Lagos finally launched the Extended Special Public Works (SPW) Programme (the 774,000 jobs) aiming at providing employment opportunities for the unemployed Nigerians.

Lagos State Governor, Mr. Babajide Olusola Sanwo-Olu speaking on Tuesday through his deputy, Dr. Kadri Obafemi Hamzat, at the official flag-off of the Programme held at the Adeyemi Bero Auditorium, Alausa-Ikeja, stated that the programme which is being implemented through the National Directorate of Employment in collaboration with State Governments and other relevant stakeholders will provide seven hundred and seventy-four thousand (774,000) jobs for Nigerians across all the local government areas out of which 20,000 will be in Lagos.

Citing the increase in population and the consequent burden of caring for such growth, the Governor called for increased allocation to the State, citing attraction of Lagos to all Nigerians with every village or town having its representative living in the State.

Sanwo-Olu said, “While we appreciate the efforts of the Federal Government through this initiative, we would like to appeal for an increase in the allocation for Lagos State in consideration of the increasing population that must be catered for.”

While noting that the initiative is taking off at the right time when governments at all level need to do everything possible to stem the tide of rising unemployment and also cushion the effect of the COVID-19 Pandemic on the people, Sanwo-Olu stated that it will also complement the state government’s efforts geared toward providing support and creating opportunities for young people to be productively engaged.

He said further, “Our administration and indeed the Lagos State Government has always been a stakeholder and partner of the Federal Government in the quest to achieve the growth and development of our economy for the benefit of our people. The Extended Special Public Works Jobs Programme being flagged off today is the brainchild of the Federal Government and one of the strategies to address the issue of unemployment.”

He said the state government a couple of weeks ago, flagged off its Graduate Internship Placement Programme, an initiative it is implementing in collaboration with private sector organisations.

Also, the State Employment Trust Fund has also been effective in delivering on its mandate through the support it has given and continues to give to young people whose creative entrepreneurial ideas have been transformed into micro and small businesses.

In addition to the various employment generation programmes being implemented, he disclosed that his administration has made substantial provision in this year’s budget for human capacity development especially for the youths.

The Governor thanked President Muhammadu Buhari for providing the leadership that has enabled the successful take-off of the programme and appreciated the efforts and enterprise put in by the team that have worked so hard to make the event a reality in spite of the challenges posed by COVID-19 Pandemic.

While congratulating the 20,000 Lagosians who have been selected to participate in the programme, the Governor urged the participants to be at their very best and be good ambassadors of the State, adding that their attitude and commitment to the assignment would flag more opportunities for the teeming unemployed in Lagos State.

Earlier in his address, the Minister for Works and Housing, Mr. Babatunde Raji Fashola who was represented by the Federal Controller of Works, Lagos State, Engr. Kayode Popoola disclosed that the Extended Special Public Works Programme is an outcome of the Pilot Special Public Works Programmes in the Rural Area approved by President Muhammadu Buhari and was implemented in Eight States of the Federation in order to gauge its impact on addressing the ballooning population of the unemployed and rising insecurity in some part of the country; the strategy was adopted to fast-track the achievement of the Economic Recovery and Growth Plan (2017–2020).

He stated that the programme is targeted at immediately engaging 774,000 selected unemployed Nigerians to execute carefully selected projects across the 774 Local Government Areas in the country.

He added that each participating Local government identified its preferred projects and will be responsible for ensuring that they are executed as planned, stressing that all tools and equipment required for the programme have been provided hence the federal government expects a strong commitment from all stakeholders in ensuring efficient implementation.

In his welcome address, the Acting Director-General, National Directorate of Employment (NDE), Mallam Abubakar Nuhu Fikpo who was represented by the Director, Human Resources, Mrs. Adeola Awulat Shafar emphasized that the programme is a very significant step in Nigeria’s quest to win the war against mass unemployment as well as to ameliorate the effect of COVID-19 pandemic.

He said “the Extended Special Public Works programme has been designed as a veritable tool through which the lives of 774,000 unemployed Nigerians would be positively touched in the next three months. Our communities will receive a facelift through the activities of the participants as they will engage in various community-specific public works activities ranging from drainage clearing and maintenance, vegetation control, feeder road maintenance, irrigation among many others.”

He, therefore, charged all participants from the State to reciprocate the gesture of the federal government by diligently execute their assigned tasks through the duration of the programme.