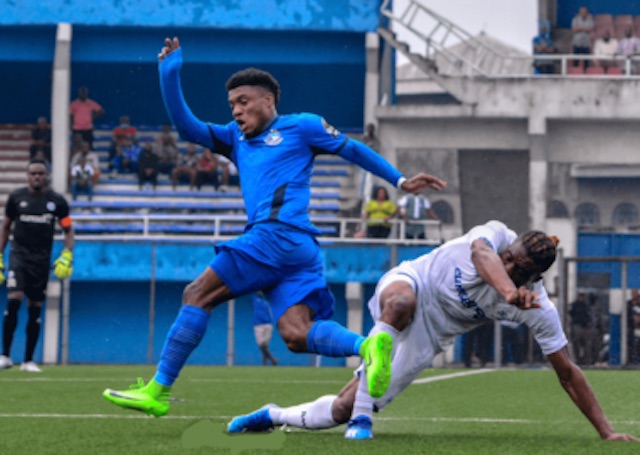 Enyimba overcame a numerical handicap to edge Rivers United 1-0 in a rain-affected CAF Confederation Cup fixture at the Enyimba Stadium on Sunday evening.

Cyril Olisema scored in the second half to settle the heated contest, halted shortly after kickoff by a heavy downpour in the Eastern Nigeria city.

With only eight minutes played, referee Mehdi Abid Charef decided that play be suspended after evaluating the effect of the downpour on ball movement

United created a chance of their own at the other end, Stephen Gopey and Godwin Aguda seeing their close range efforts cleared away, as the half wound down.

Oladapo again threatened with a long range freekick after the restart, before Sadiq Abubakar tore down the flank only to have his low cross well dealt with.

The defining period arrived just before the hour when Anayo Iwuala held off tackles to set up Olisema who held his nerves to beat Afelokhai at his near post.

Youngster Orok Gabriel came on for Sadiq Abubakar in Fatai Osho’s first switch, but it was not long after that Enyimba were cut to ten men as Tosin Omoyele was sent off for an off ball incident.

Enyimba, however managed their lead, ensuring that they approach the return fixture in a week’s time with a clean sheet.

Coach Fatai Osho said at the end of the match: “It’s not really a bad result bearing in mind the standard of this Rivers United team. They have a formidable team and I believe strongly that after this two-legged affair both teams will gain a lot from this playing in the NPFL”.

The following are results from the first-leg, play-off round of the 2020/21 CAF Confederation Cup, played across Africa this weekend.

The first-named teams hosted the first-leg.

The second-leg of all the matches will be played on 21 February.