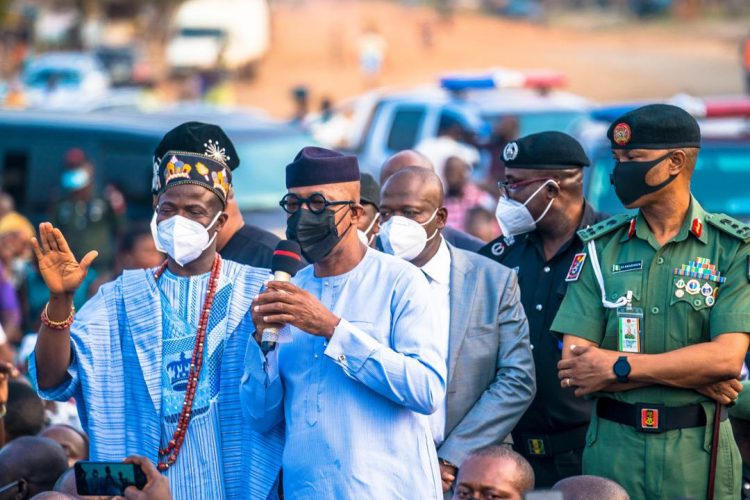 Ogun state Governor,Prince Dapo Abiodun and the Paramount Ruler of Yewaland,Oba Kehinde Olugbenro and Security Cheifs in the state

Ogun State Governor, Dapo Abiodun has disclosed that five northern governors are to hold a security peace meeting with him in Abeokuta, on Tuesday.

The Governor revealed this on Monday while leading the security chiefs in the state and some members of the State Executive Council to the troubled area in Yewa Local Government Council terrorised by suspected herders.

Abiodun, while addressing some aggrieved villagers at Oja-Odanand Igbooro where three to four villagers were reportedly killed and nine injured on Sunday night had a hectic time in calming them down over the development .

The governor, while speaking on the stakeholders meeting with five northern governors did not mention the governors, but, said those governors were of Fulani extraction who have people living in the state.

He also hinted that all the concerned groups and people would be represented with a view to chatting a way forward on the insecurity situation in the state.

“I have called a stakeholders meeting tomorrow with my colleague governors who are Fulani that have people here.

“Five governors are coming to Abeokuta from Northern states. We will call some of you to the meetings and discuss the matter,” he said.

On the security measures put in place, the governor said he would hand over some security vehicles and motorcycles to the special task force he set up for Yewaland on Tuesday.

He said “The delegation I sent told me what they saw. They said a lot of things happened and as they were giving the report of what they saw, we heard that another attack happened.

“I called for security meeting this morning. And before yesterday, I have set up a task force and bought new vehicles and motorcycles for Yewaland security. The task force consists of police, soldiers , civil defence corps and hunters to help us in terms of security in your area.

“Tomorrow by God’s grace, all the new vehicles and motorcycles will be released. The task force will be stationed here, they will not only patrol your areas and go back to Abeokuta,” he assured the people.

He however promised to foot the hospital bills of those who were injured by herdsmen, pledging to help those who lost their property during the attack by cushioning the effect of the loss.

The governor said he had asked the Commissioner for Special Duties to collate the list of those who were affected in the attacks.

Meanwhile, villagers in some of the affected areas in Yewaland, where Fulani herdsmen attacked and killed some farmers have deserted their houses.

Some of the villages include Agbon-Ojodu, Moro, Asa and Ibeku, among others in Yewa-North local government area of the state. They have recorded series of attacks from herdsmen few weeks back. .

Earlier, the Eselu of Iseluland, Oba Akintunde Akinyemi said the people of Ketuland were demanding that the governor give an order for the eviction of Fulani herdsmen in the land.

Akinyemi, who spoke at Oja-Odan during the visit of the governor to the area, said the entire people of Ketuland were requesting that the Fulani herdsmen leave the area.

“They have killed a lot of our people in Ketu, Igbooro, Iselu, Agbon-Ojodu, Asa, Ibeku and Oja-Odan. Within five days, Fulani have killed five persons in Igbooro, three in Asa, making eight. Your Excellency, our people have regards for you and they know that you will be just.

“I know that if not for the governor, if we ask our people to face Fulani, there will be war. Due to this, we want the paramount ruler in Yewa to support us while we want the governor to give an order that Fulani should not come to Ketuland again.”

The Olu of Ilaro and Paramount ruler of Yewaland, Oba Kehinde Olugbenle in his remarks said his people in Yewaland were no longer sleeping with their eyes closed due to the herdsmen attacks.

He, however, appealed to the people to be patient with the governor,saying security measures have been put in place to end the incessant killings in Yewaland