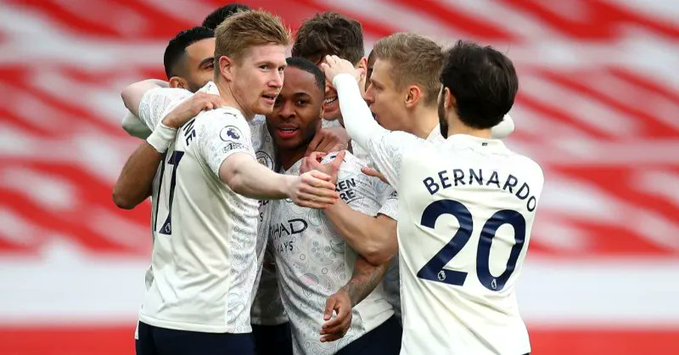 Manchester City beat Arsenal by a lone goal on Sunday to make it 18 straight wins in all competitions and solidify its position on top of English Premier League.

The team have also equalled club record 11 consecutive away victories – by beating Arsenal 1-0 at the Emirates Stadium.

Much of City’s winning run have been down to scintillating attacking play.

Raheem Sterling headed home from Riyad Mahrez’s inch-perfect cross to give the visitor a dream start inside two minutes.

It was an untypical but brilliant Sterling goal and provided City just reward for a lightning-quick opening.

Joao Cancelo almost doubled City’s lead late on with a wonderful outside-of-the-boot right-footed effort that sailed just wide, but with Fernandinho superb in midfield – and City’s centre-backs once again in brilliant form – one goal was all we needed to secure a vital three points.

City are now 25 games unbeaten, with their last defeat coming late November away at Tottenham.