The romance between Fani-Kayode and Yahaya Bello 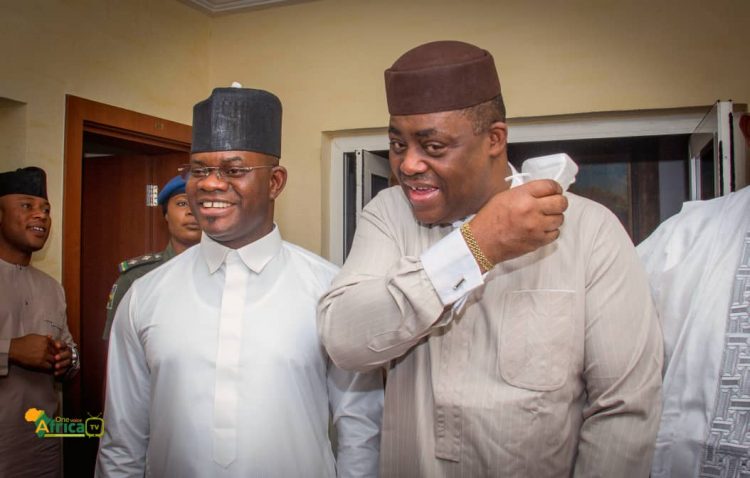 In the last one month, the affinity between former Aviation Minister, Femi Fani-Kayode and the Governor of Kogi State, Yahaya Bello calls into question. Fani-Kayode, a staunch member of the Peoples Democratic Party, PDP, since 2015 has never seen anything good in the All Progressives Congress, APC. But this new alliance has set tongues wagging as to what Fani-Kayode is up to.

The affinity started early last month when Fani-Kayode met with Bello and the APC Interim Chairman, Mai Mala Buni. The critic splashed photos of the meeting on his twitter page, fueling speculation that he is on his way to APC and many stalwart of the party kicked against Fani-Kayode pitching his tent with the APC.

Few days later, Bello announced openly that Fani-Kayode has joined the APC and that he was welcomed. Fani-Kayode had always referred to APC as darkness and had consistently attacked President Muhammadu Buhari. But since that meeting with Bello, Fani-Kayode stopped attacking Buhari, in fact, for up to a month now, the former Aviation Minister has not attacked Buhari, unlike when he used to attack him on daily basis.

With the tension generated by the purported planned defection of Fani-Kayode to APC, he came up to denounce the move, saying he was still in PDP. But with the way he spoke, he never said he would not join APC in the future or would not leave PDP.

Shortly after that, Fani-Kayode is back with Bello again, going around with him to functions like a bodyguard. Bello has succeeded in dragging Fani-Kayode to the Presidential Villa, Abuja for a press conference after a meeting with the Amalgamated Union of Foodstuffs and Cattle Dealers who stopped foodstuff from coming to Southwest.

The critic of APC tweeted after the meeting, saying “Over the last three days His Excellency Governor Yahaya Bello of Kogi state presided over a series of crucial meetings on the food embargo against the South with Alhaji Muhammed Tahir (the President of the Amalgamated Union of Foodstuffs & Cattle Dealers of Nigeria and their Chairmen from all the 36 states and the FCT), Dr. Awwal Abdullahi Aliyu (the President of the Northern Consensus Movement),Alhaji Abdullahi Mai Agogo (Sarkin Yaki Buhari),Alhaji Shettima Yerima& I.

“We worked extremely hard & well into the early hours of each of the mornings on the assignment given to us. In the end we give thanks to God that we achieved all our objectives. Amongst them were the fact that we averted a major crisis, we ensured there were no reprisal killings of southerners in the north after the Shasha killings.

“We ensured that there was no tribal war, we ensured that the food embargo placed on the South by the Union was lifted, we stabilised a very tense and dangerous situation which had the potential of tearing our nation apart in a very violent way and we brought peace and unity to the country.

“To round it all up we held a press conference at Kogi State Govt. Lodge in Abuja yesterday afternoon & another later in the evening at the Presidential Villa after having a fruitful and productive meeting with Professor Gambari, Chief of Staff to President Muhammadu Buhari.”

Fani-Kayode now seems to stylishly drum support for the presidential ambition of Bello in 2023. The romance with Bello might not be unconnected with the 2023 move.

Tacitly, the former aviation minister is campaigning for Bello who is from Middle Belt and has ambition to be president in 2023.

“It was an honoured and pleasure to receive His Excellency, Governor Yahaya Bello of Kogi state in my Abuja home yesterday. We had a wonderful time and my entire household was thrilled by his presence. We shall continue to build bridges and to work hard and interact across party lines for the unity and progress of our country,” he tweeted.

Fani-Kayode has been lambasted on social media for his romance with Bello, with people tagging the Kogi State governor’s presidential ambition as a ‘bad market.’ Some alleged that Fani-Kayode is getting close to Bello for his ‘belly.’

But Nigerians are watching to see where this romance will end. Many believe there is something between the duo that the public is not yet aware, but will be made manifest as 2023 gets closer.