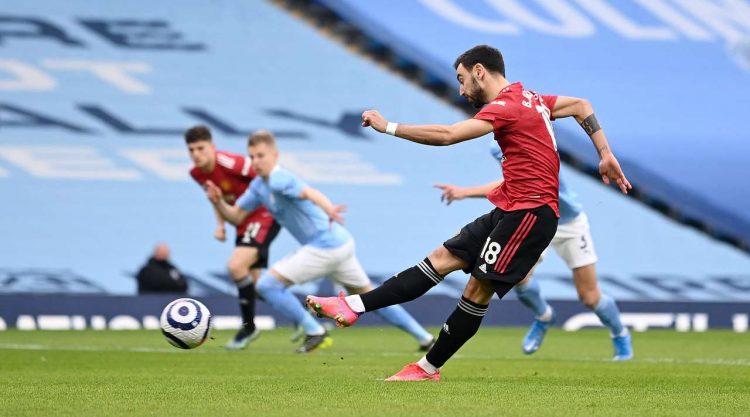 City controlled possession but United did the scoring, opening scoring at exactly two minutes in the first half through penalty.

City’s keeper, Ederson got a hand on the penalty from Bruno Fernandes, but could not stop it from flying inside the left post.

The penalty was as a result of Gabriel Jesus’ reckless foul in order to win the ball from his opponent. Anthony Taylor has a clear sight of it and blew his whistle. The referee pointed to the penalty spot.

A second goal from Luke Shaw on 50 minutes sealed the game for United to claim the bragging right at Manchester.

Marcus Rashford played a simple square pass into the feet of Luke Shaw in the box, who composed himself and lashed the ball into the bottom right corner.

City pressed but could not score any goal.

On four minutes Luke Shaw wasted an opportunity. He created some space for himself inside the penalty box and unleashed a decent strike towards the middle of the net, but Ederson made a comfortable save to thwart him.

On 43 minutes, Kevin De Bruyne stood over the free kick and opted to take it himself, sending it towards the top of net only for Dean Henderson to dive and made a save.

On 69 minutes, Anthony Martial blew a clear opportunity to score a goal and made it 3-0 for City.

He was one-on-one with Ederson inside the six-yard box and attempted to put the ball into the bottom right corner, but was denied by a great save.

Despite the loss, City sit comfortably at the top of the premier league with 11 points clear of closest rival, United.