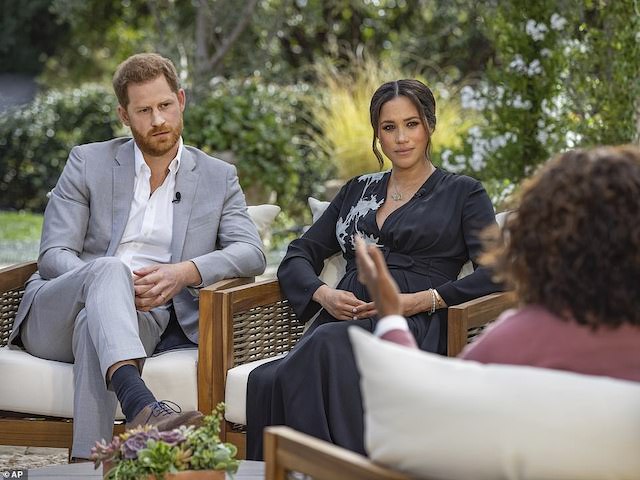 Prince Harry and Meghan during the interview with Oprah Winfrey

Here are some highlights of the TV interview granted Oprah Winfrey by Prince Harry and his wife, Meghan the Duchess of Sussex. The interview aired on CBS New early today

The Duchess of Sussex revealed she had suicidal thoughts and said: ‘I just didn’t want to be alive any more.’

She said she begged for help, and asked to go somewhere to get help, and approached one of the most senior people in the institution, but was told it would not look good.

Baby Sussex is a girl

Harry and Meghan revealed they are expecting a baby girl.

The duke joined his wife in the second half of the interview, and told the chat show host: ‘It’s a girl.’

He said his first thought was ‘amazing’ when he discovered they were having a girl, adding: ‘Just grateful. To have any child, any one or any two, would have been amazing.

‘But to have a boy and then a girl, I mean what more can you ask for? Now we’ve got our family, we got the four of us and our two dogs.’

Asked if they were ‘done’ with two children, Harry said ‘done’ and Meghan said: ‘Two is it.’

She also confirmed the baby is due in the ‘summertime’.

Meghan said, when she was pregnant with Archie, an unnamed member of the royal family raised ‘concerns and conversations about how dark his skin might be when he’s born’.

Asked whether there were concerns that her child would be ‘too brown’ and that would be a problem, Meghan said: ‘If that is the assumption you are making, that is a pretty safe one.’

Pushed by Winfrey on who had those conversations, Meghan refused to say, adding: ‘I think that would be very damaging to them.’

She added: ‘That was relayed to me from Harry, those were conversations the family had with him, and I think it was really hard to be able to see those as compartmentalised conversations.’

Meghan suggested she and Harry wanted Archie to be a prince so he would have security and be protected.

The duchess expressed her shock at ‘the idea of our son not being safe’, and the idea of the first member of colour in this family, not being titled in the same way as other grandchildren.

Archie, who is seventh in line to the throne, is not entitled to be an HRH or a prince due to rules set out more than 100 years ago by King George V.

He will be entitled to be an HRH or a prince when the Prince of Wales accedes to the throne.

– The Prince of Wales

The Duke of Sussex said his father the Prince of Wales stopped taking his calls while Harry and Meghan were in Canada ‘because I took matters into my own hands. I needed to do this for my family’.

He said Charles wanted him to put his plans in writing.

Harry denied that he had ‘blindsided’ his grandmother Queen with the bombshell statement about stepping down as senior royal.

The duke said he believed the report probably could have come from ‘within the institution’.

Meghan praised the Queen, saying she had been ‘wonderful’ to her and had once asked her to share a blanket which sits across her knees for warmth.

The Duchess of Sussex also said that the monarch had given her some ‘beautiful’ pearl earrings and a matching necklace.

She also revealed she had called the Queen to check in on the Duke of Edinburgh’s health after learning the 99-year-old had gone to hospital in London last month.

– The Duchess of Cambridge

Meghan said Kate made her cry ahead of her wedding.

Reports circulated ahead of the Sussexes’ nuptials that Meghan left Kate in tears at Princess Charlotte’s bridesmaid dress fitting.

Meghan said she was not sharing the information to be ‘disparaging’, but added it was ‘really important for people to understand the truth’.