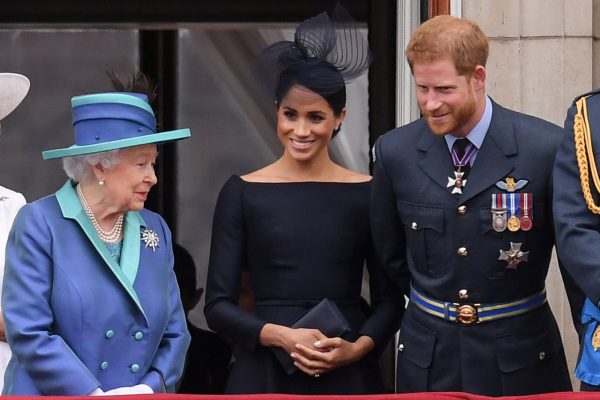 Queen Elizabeth II, Meghan Duchess of Sussex and Prince Harry together in 2018

Queen Elizabeth said on Tuesday the British royals were saddened by the challenging experiences of her grandson Prince Harry and his wife Meghan and promised to privately address revelations about a racist remark about their son.

Meghan and Harry’s tell-all TV interview with Oprah Winfrey aired on U.S. television on Sunday has plunged the monarchy into its biggest crisis since the 1997 death of Harry’s mother Diana.

In the two-hour show, Meghan accused Britain’s royal family of raising concerns about how dark their son Archie’s skin might be and ignoring her pleas for help while she felt suicidal.

Harry also said his father, heir-to-the-throne Prince Charles, had let him down and that he had felt trapped in his royal life.

“The whole family is saddened to learn the full extent of how challenging the last few years have been for Harry and Meghan,” Buckingham Palace said in a statement issued on behalf of Elizabeth.

“The issues raised, particularly that of race, are concerning. Whilst some recollections may vary, they are taken very seriously and will be addressed by the family privately. Harry, Meghan and Archie will always be much loved family members.”

The Palace considered that this was a family matter, a royal source said, adding the royals should be given the opportunity to discuss the issues raised privately as a family.

The interview was watched by 12.4 million viewers in Britain and 17.1 million in the United States, triggering a crisis to which the monarchy had to respond, media said.

It has proved divisive among the British public, with some believing it showed how outdated and intolerant the institution was, while others decried it as a self-serving assault that neither Elizabeth nor her family deserved.

“It could hardly be more damaging to the royal family, not least because there is little it can do to defend itself,” The Times said in a lead article under the title “Royal Attack”.

“The key to the monarchy’s survival over the centuries has been its ability to adapt to the needs of the times. It needs to adapt again,” The Times said.

In the interview, nearly three years since her wedding in Windsor Castle, Meghan gained sympathy in the United States by casting some unidentified members of the royal family as uncaring, mendacious or guilty of racist remarks.

Meghan and Harry have also had a torrid relationship with the British press, successfully taking papers to court on occasions, and have repeatedly questioned what they say is reporting tainted by racist overtones.

Harry said in the interview he did not know where to turn when faced with such troubling media coverage and felt hurt when his family failed to call out racist reporting.

He said the royal family had an unhealthy silent agreement with the British tabloids and that the family was paranoid about the media turning on them.

“There is a level of control by fear that has existed for generations,” Harry said.

For the monarchy, which traces its history through 1,000 years of British and English history to William the Conqueror, Meghan’s bombshell has been compared to the crises over the death of Diana and the 1936 abdication of Edward VIII.

British Prime Minister Boris Johnson watched the interview, his spokesman said, but would not be making further comment on it. read more

Johnson said on Monday he had the highest admiration for the queen but that he did not want to speak about the interview. New Zealand’s Prime Minister Jacinda Ardern said her nation was unlikely to stop having the queen as head of state soon. read more

Opponents of the monarchy said the allegations made by Meghan and Harry showed how rotten the institution was and that the Palace’s public relations machine had created a distorted image of the royals.

“Now people are getting a much clearer picture of what the monarchy is really like. And it doesn’t look good,” said Graham Smith, head of Republic, a campaign group which seeks to abolish the monarchy.

Royal supporters cast Meghan, 39, an American former actor, as a publicity seeker with an eye on Hollywood stardom.

A YouGov poll found a majority of young people thought the royals’ treatment of the couple was unfair, while half of older people said the opposite. read more

The gravity of the claims has raised questions about how the British monarchy, which survived centuries of revolution that toppled their cousins across Europe, could function in a meritocratic world.