CDS Lucky Irabor tells troops to be ruthless with bandits 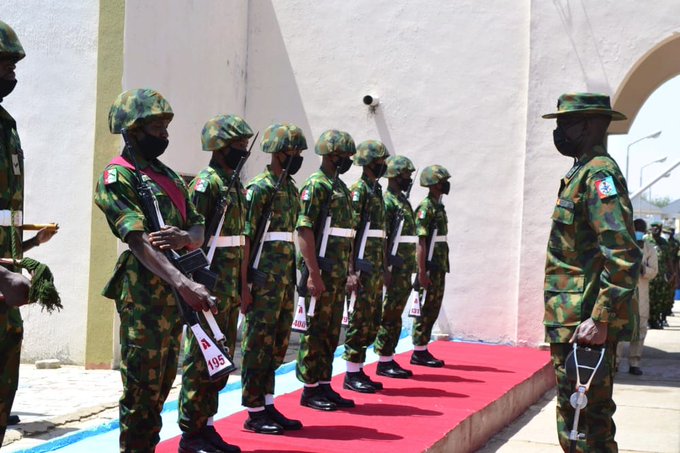 CDS Irabor in Zamfara with troops

The Chief of Defence Staff, Gen. Lucky Irabor, has urged troops of Operation Hadarin Daji to be ruthless with bandits, kidnappers and other criminals in Zamfara.

Irabor gave the charge when he led the Service Chiefs and Principal Staff Officers of the Defence Headquarters and Services Headquarters, on operational visit to the troops in the state.

The Acting Director, Defence Information, Brig.-Gen. Onyema Nwachukwu said the purpose of the visit was to assess the ongoing military operation in the state, as well as appraise the combat and operational readiness of troops.

The CDS commended the troops for their efforts and urged them to continue give their best to ensure the return of lasting peace to Zamfara as well as the North-West zone in general.

He urged them to be ruthless and more aggressive in decisively routing out unrepentant bandits and other criminals within the North-West zone comprising Zamfara, Katsina, Sokoto and Kebbi States.

Irabor also charged the troops to remain focused, committed and resolute in discharging their duties.

He gave assurance that the service chiefs would support and do all that was needed to enhance their fighting capabilities and efficiency in their areas of operations.

He also assured the troops of improved welfare and prompt resolution of administrative challenges bedeviling the operation.

The CDS also assured the government and people of Zamfara of the determination and resolve of the military and other security agencies, in decisively dealing with all criminal elements operating across the various zones of the country.

While receiving the service chiefs, Gov. Bello Matawalle of Zamfara, called for more modern war hardware to be provided for the security agencies operating in the state.

Matawalle said that improved and modern equipment would help nip in the board the current spate of insecurity confronting not only Zamfara, but the entire country.

He also enjoined the military to clear all the bandits’ camps in the state, stressing that this would go a long way to eliminating them