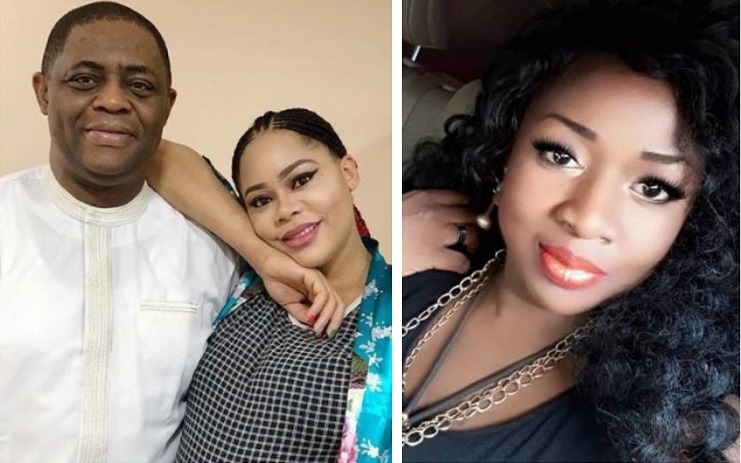 Regina Fani-Kayode, the wife of former aviation minister Femi Fani-Kayode, has labeled Precious Chikwendu a mother from hell and a horrible woman.

Regina state this in a statement she authored to knock the bottom out of the claim made by Precious Chikwendu in a tell-all statement sent to PM News.

Precious Chikwendu, the estranged wife of Fani-Kayode, on Friday claimed that the former minister has mental health challenges.

She noted that Fani-Kayode often turned her into a punching bag, even while pregnant.

She denied Fani-Kayode’s accusations that she was a gold digger or an adulteress.

Chikwendu also accused him of lying to her that he had divorced his wife Regina before she agreed to marry him.

“I want to state clearly that my marriage to FFK was based on false pretence as he lied that he had divorced his last wife, Regina.

“I found his marriage certificate in 2016 during the EFCC raid at our then home.

“When I confronted him about this, he said that he is about starting Regina’s divorce process and added that he had not seen her in the last ten years”.

The most troubling part of her statement was that Fani-Kayode has mental challenges, who was abusive to her.

According to her, in his unstable mental state, he often called the triplets in her womb, cockroaches, as he punched her freely, in the stomach:

“While I was pregnant with the first child and later the triplets, FFK was habitually beating and mostly punching my stomach.

“Anytime he was angry and moody, describing my unborn babies as cockroaches or “a thing” that he will knock off my belly.

“In one of these attacks and kicking on my tummy, my late mom and my sister visited, and they threw themselves in between us to stop him from further attacks.

“In his anger, he hit my mum in the head. After that, FFK ended up accusing my sister of assault and got her detained at a police station for coming in-between his punches and me”.

However, Regina Fani-Kayode stated that Precious Chikwendu lied and would soon be exposed.

My name is Mrs. Regina Fani-Kayode and I am the first wife of Chief Femi Fani-Kayode. We were married in 1997 and we are still married up until today.

Precious Chikwendu, a strange woman that he took under his roof, married under law and custom and lived with for seven years has written things about my husband which are not only untrue but also downright defamatory and scandalous and I will respond to her with the following as a first salvo.

Precious, you are just a sick woman and a big liar. I know you collected over half a million USD dollars from Femi within the first few months of meeting him for a fake investment. We have witnesses to prove it and remember that you even asked me to thank him for it. I also know he set you up in one business or the other four times in 7 years and got you offices etc. but you squandered it all.

When you came to my husband and took over my home you and your family were like hungry refugees. You had nothing but rubber slippers and you were desperate for help.

My husband sent three of your siblings to the highest schools for seven years and took care of their every need yet you now slander him and insult him not minding the effect it will have on your own children. That in itself proves that you are insane.

You say he has mental issues meanwhile you were the one that was locked up in a mental hospital for one month after trying to kill him and his children. How could you have stayed in the home of a man with mental problems for six good years and allowed your mother, aunty, two brothers and sisters to stay there too?

Who are you trying to fool? You are nothing but a wretched ingrate and, like Madame, Kemi Olunloyo said, a pathological liar. And God will punish you and all your siblings for your ingratitude and lies.

You knew he was still married to me because you and I spoke countless times on the phone and you even stayed in my room and wore my clothes.

You had nothing when he took you in, you are so ungrateful. 6 of your relatives lived in my house for 6 yrs and they were all depending on Femi for food, upkeep, medical bills and school fees. Even your sister’s wedding was paid for by him.

But that didn’t stop you from plotting with your gang to kill him. You admitted to me about being naked in the hotel room with a man on the night FFK caught you.

I know the huge amounts of money he spent on you and your family and I’m sure you can’t deny that, that’s why his friends tagged you as a gold digger.

Your inability to love your children which you attributed to a medical condition was well tolerated by FFK and twelve nannies and nurses were working round the clock to keep you from harming them but you still got to beat up Aragon badly and bleached their skins till they broke out in sores.

You are a mother from hell and a horrible woman. In one of your dramatic fits, you pulled knives to stab Femi and the children and police were called in stop you.

FFK never laid hands on you, even on the day he caught you in the hotel room with your lover. Is that the act of a violent man?

All his male friends you have been offering your body to have already confessed so please stop trying to blackmail them. Stop working for those criminals who are just using your body to rip off rich men.

There is so much more to expose about your wickedness but I really don’t have time for your drama this year.

I am the reason Femi tolerated your nonsense for so long but enough is enough, I will not allow you to kill him because of your greed. He’s too busy to answer your stupid tantrums and fantastic lies, your media rants lack facts and the powerful truth will always prevail.

Your constant threats to kill the children is why Femi is afraid to leave them with you, you can’t even find the time to call them till now.

You think raining insults daily on their nannies is the best way to encourage them, instead of talking to your babies. And why were you stealing half their salaries when you had your own allowance? All the evidence will be presented in court soon.