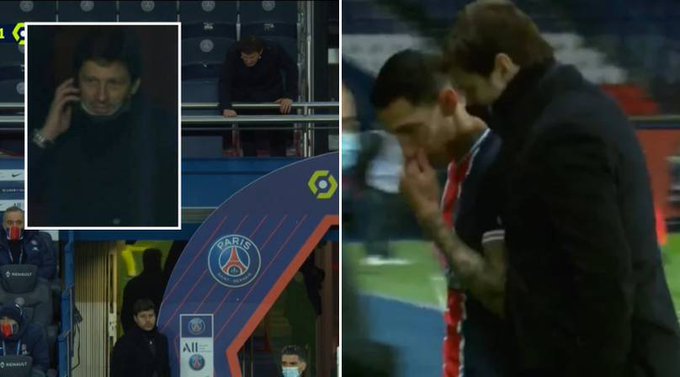 Angel Di Maria was on the field playing for Paris Saint-Germain unknown to him that his wife and children were being held hostage by armed robbers.

However, he was substituted in the 62nd minute after PSG’s sporting director Leonardo was spotted by TV cameras making contact with Pochettino.

According to reports, Leonardo got the bad news and had to inform Pochettino which led to Di Maria being substituted.

Pochettino then informed Di Maria of the concerning situation and he immediately left the stadium in tears.

Initial information coming out of France claims members of family were present at his home during the robbery with reports they were held hostage.

Marca later confirmed the family were unharmed but were held hostage.

“Various reports in France indicate that the woman [Di Maria’s wife] and her children were kidnapped for a short time.

Di Maria is married to Jorgelina and the couple have two young children.

It is also being reported that Di Maria’s team-mate Marquinhos was also targeted on Sunday, with his parents’ house being raided.

Marca reported that “The same information reveals that Marquinhos was also the victim of an almost identical situation, although in his case it was his parents who were in the house at the time of the robbery.”

Le Parisien report (per Get French Football News) that Marquinhos’ dad, who is 52 years old, was “punched” and hit “multiple times” in the “face, thorax and ribs”. He had gone into the garden to feed his dogs before being set upon by two men, who forced him inside.

However, PSG surrendered the lead to lose 2-1 at home to Nantes, conceding twice after the break to remain three points behind Lille at the top of Ligue 1.

And Pochettino hinted at a severe incident after the contest by admitting football wasn’t at the front of their minds during half-time.

He said: “There is the disappointment of having lost three points, but the group was concerned about things that you are probably already aware of.

However, it is also becoming an increasing problem for PSG. Sergio Rico, Mauro Icardi, Thiago Silva and Eric Maxim Choupo-Moting also suffered robberies while playing for the Parisians.

Our thoughts are with both players, Di Maria and Marquinhos and their families. We hope to get positive news concerning their well-being.