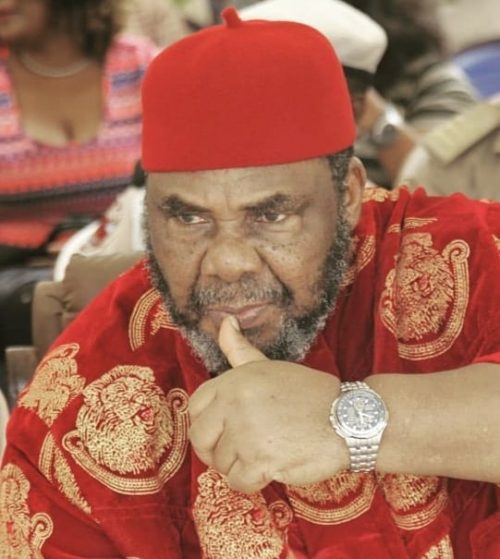 Nollywood icon Pete Edochie rankled many feminists with his advice on how married women should deal with their cheating husbands.

In an interview with Adakari TV, Edochie advises women not to abandon their marital homes, even when their husbands are cheating on them.

Then he gave an advice that many are uncomfortable with.

He said: “If you think the husband is leaving the house to go and have an affair outside, put a packet of condom in his pocket. Psychologically, he’s gonna think, ‘this woman has my interest at heart’. If it is his intention to stray, he’ll pull himself together.

Some men supported him for the creative advice, while some called the veteran thespian old school.

Women and feminists slammed his suggestion.

And here are some reactions:

This Pete Edochie 's interview about cheating men, their wives and condoms is just going to shift attention from what is actually important for the next few days on here.

Pete edochie is very quiet awesome. He made sense in the interview like no other. How I wish women will learn. He says a pack of condom that's not enough just put 1 box of condom. #PeteEdochie

Somebody should tell these women Pete Edochie doesn’t give 2 fvcks about what they think about him. All this man wants to do is to drop his 2 cents irrespective of how you see it and would do it 1million times if he’s called for another interview

That Pete Edochie’s interview takes are more figurative than they are literal.

It’s partly about tackling infidelity without necessarily taking the high road preferred by the west.

It’s about not losing ourselves totally to negative acculturation

I see a lot of women on the TL, who are unapologetically in support of Pete Edochie’s narrative in that circulating interview, and it saddens my heart that as if it’s not enough that MISOGYNY and PATRIARCHY was promoted by this man, our women are embracing such MEDIOCRITY.

70+ Igbo man. I think they need to stop interviewing Pete Edochie, More especially on social issues. Because the more you interview him, The more is setting a trap to ridicule him….

My future husband better be watching that Pete Edochie interview with bewilderment ….except he too can pack postinor in my bag whenever I’m traveling to “check” me 😅😂

Watching Pete Edochie’s interview eeh, anger just run down through my vein. Like what’s this? Well, I can’t blame him much because in their own generation our mother’s endured a lot in the hands of this men just to keep the marriage going but we are trying

Feminists to Pete Edochie after the interview pic.twitter.com/h7jVFObRhq