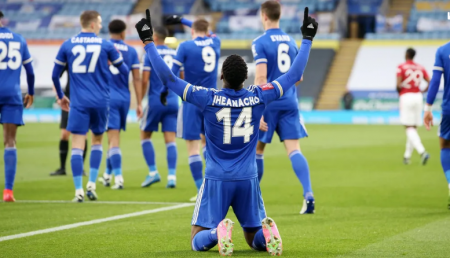 Nigeria’s Kelechi Iheanacho hits a brace on Sunday as Leicester City dump Manchester United out of the FA Cup to reach the Semi-Final.

The Nigerian who hits a hat-trick last weekend lived up to expectation as he was named in Leicester’s line up.

He did not disappoint as he put his club in the lead on 24th minutes of the first half after a blunder between United’s keeper and a defender.

A back-pass from Fred came straight to Iheanacho in the area and the Nigerian rounded Henderson and converted for the Foxes.

Greenwood applied the finish after stylish play from the visitors down the left. The youngster was there to get on the end of Pogba’s cross.

Youri Tielemans restored Leicester’s lead in the second half with a well-taken finish on 52 minutes.

Tielemans made it all himself as he charged into Manchester United’s area and slotted it past Henderson and into the bottom corner.

Iheanacho got his brace and sealed the victory for United on 78 minutes. His close-range finish made it 3-1 to the home side with just over 10 minutes remaining.

Albrighton’s free-kick reached the far post and there’s Iheanacho to tap it into the Manchester United.