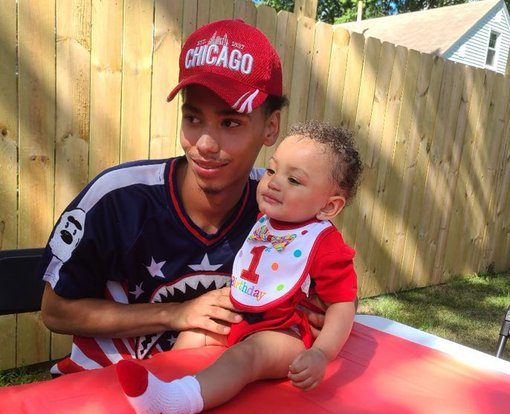 Daunte Wright with his son, killed by Minneapolis policeman

Protests have erupted against Minneapolis police when an officer fatally shot a young Black man, Daunte Wright, after stopping his vehicle for a traffic violation on Sunday.

The body of the 20 year-old victim was left on the sidewalk for hours.

Wright, a father of a one year old boy was reportedly murdered by the policeman for having air fresheners on his rear view mirror.

The fatal shooting happened about 10 miles (16 km) from where George Floyd was killed during an arrest in Minneapolis last May.

As angry crowds swelled into the hundreds outside the Brooklyn Center Police Department building on Sunday night, officers in riot gear fired rubber bullets and lobbed flash bangs at protesters and let off clouds of chemical irritants.

Minnesota Governor Tim Walz said in a statement that he was monitoring the unrest in Brooklyn Center, a suburb of Minneapolis, as “our state mourns another life of a Black man taken by law enforcement.”

Late Sunday, a group of about 100 to 200 protesters gathered around the Brooklyn Center police headquarters and threw projectiles, including rocks, at the police department, Commissioner John Harrington of the Minnesota Department of Public Safety said in a live-streamed news briefing.

The group was later dispersed.

Another pocket of protesters broke into about twenty businesses at a regional shopping centre, with some businesses looted, according to the police and local media reports.

Anti-police protesters have already spent recent days rallying in Minneapolis as the trial of Derek Chauvin, a white former city policeman, enters the third week in a courthouse ringed with barriers and soldiers from the National Guard.