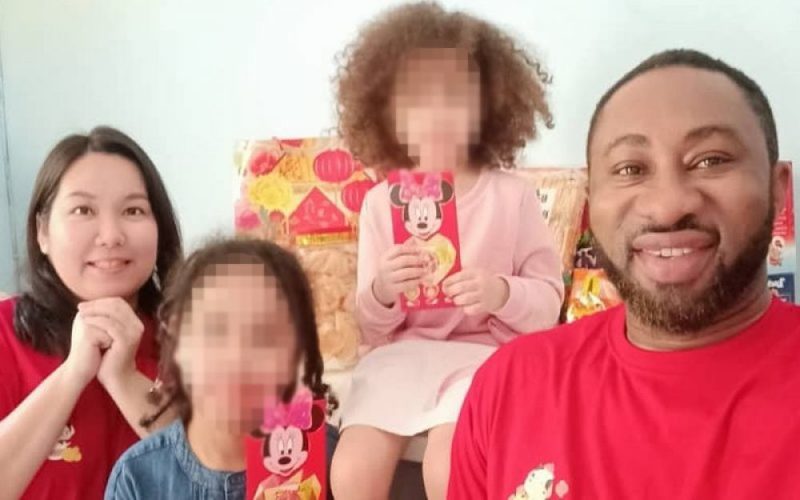 Simon Adavize Momoh, wth his wife and two daughters, to be deported by Malaysia

A Nigerian living in Malaysia, Simon Adavize Momoh, who was arrested for drink-driving has been ordered to be deported, though he paid the fine for the offence.

Malaysian newspapers reported that Momoh, who is married to a Malaysian and has two daughters, is being detained at the Semenyih Immigration depot.

The 33 year-old Nigerian was not even aware he was about to be sent home, until he had access to his lawyer, Vemal Arasan.

It was Vemal who told him that a deportation notice was sent to Momoh’s wife, Low Kar Hui, who was asked to buy a ticket for Momoh’s flight back to Nigeria.

According to reports, Vemal had filed a habeas corpus before high court judge, Ab Karim Ab Rahman, who ordered the immigration to allow Vemal had access to Momoh.

Vemal told pressmen that he was unable to have full access to Momoh because the immigration said there was a power outage.

Vemal at the preliminary hearing of the habeas corpus sought Momoh’s release to enable them to prepare a proper submission, adding that the Attorney-General’s Chambers (AGC) had agreed for him to liaise with his client.

Karim has set Wednesday this week for a full hearing of his habeas corpus application.

Momoh, who has been married to Low for the past eight years and has a valid visa, was arrested at a roadblock in Cheras in the early hours of March 15 on suspicion of drink-driving.

He pleaded guilty in court the same day, paid the RM12,000 fine, and Low was told he would be released at 5pm.

However, he has been detained at the Semenyih centre since then.

Meanwhile, a church in Kuala Lumpur has called on the authorities to release Momoh.

The Cathedral of St John the Evangelist, in a statement, urged the immigration department to consider the well-being of Momoh’s Malaysian wife and their two young children and not deport the 33-year-old.